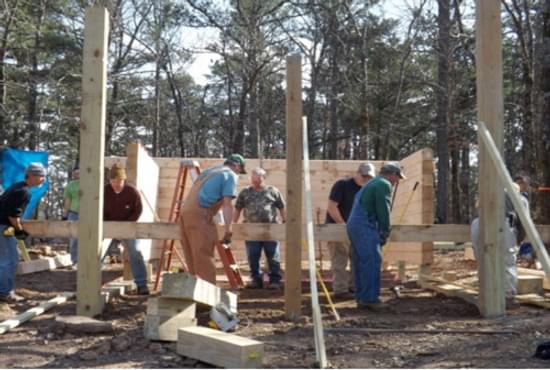 The Friends of the Ouachita Trail, using primarily volunteer labor, completed 12 shelters along the western end of the trail, which spans the two states. Users include hikers, backpackers, hunters, and mountain bikers.

The Ouachita National Recreation Trail stretches 223 miles through the Ouachita Mountains of Arkansas and Oklahoma. The Ouachita Trail, as it is more commonly known, runs from Talimena State Park in Oklahoma, through Queen Wilhelmina State Park and ends at Pinnacle Mountain State Park, near Little Rock, Arkansas.

This trail is used by hikers, backpackers, hunters, and mountain bikers. It is a nonmotorized single track trail open only to foot traffic and partially open to mountain bicycles. The Ouachita Trail is located primarily within the Ouachita National Forest and is administered by the U.S. Forest Service. It traverses the Flatside Wilderness, the Upper Kiamichi Wilderness and several wildlife management areas.

There are now 21 shelters for overnight camping located along the trail as a result of Recreational Trails Program funding. Until 2013 there were only nine shelters completed along the whole length of the trail and these were primarily in the eastern Arkansas end of the trail system. These old shelters date back 25 years. 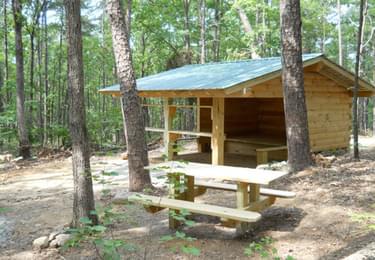 Completed shelter along the Ouachita Trail

The Friends of the Ouachita Trail developed a plan to complete an additional 12 shelters on the western end and began the process of applying for grant money and researching shelter designs that their members could implement.

With the help of two RTP grants from CRT for $35,100 (Oklahoma) and $35,230 (Arkansas) and the FoOT match, eight new shelters were built. FoOT was able to fund an additional four shelters. With a lot of back-breaking volunteer work, 12 shelters were completed between March of 2013 and November 2016.

Each shelter was surveyed, designed, lumber pre-measured and cut, and then built with volunteer labor from the Friends of the Ouachita Trail, the U.S. Forest Service, and some additional volunteers from the Americorp Team and the Texas Conservation Corps helping out. The average number of hours per shelter was 620 with about 22 people per build. Average round trip mileage for all participants was 4,500 miles per shelter. 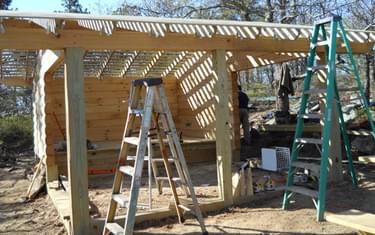 The project required a great deal of cooperation— from hundreds of Friends of the Ouachita Trail members, the Arkansas Highway Department, Oklahoma State Parks Division, Americorp, the Texas Conservation Corp, and partners at the U.S. Forest Service. This multi-year project could not have been completed without the prolonged dedication of all these groups together.

The trail traverses the pine- and oak-clad Ouachita Mountains, the highest peaks from the Rockies to the Appalachians. These are unique mountains, running east-west rather than north-south, with interesting geological features. The area is characterized by clear streams and wide valleys, picturesque rock outcroppings and sharp ridges with panoramic views.