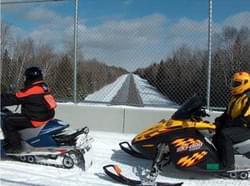 Using $1.02 million of RTP funds and $460,928 of Michigan Snowmobile Trail Improvement Funds a multi-use bridge was constructed over Interstate 75 to give access to the trail systems on each side in a safe manner.

The bridge was open to snowmobiles in Winter 2003-2004 and is open to nonmotorized recreation in snow free months. Five miles of trail were rerouted to allow the new bridge, and a parking area added.

The reroute removed the trail from M-134 crossing I-75, a heavily traveled State road and consists of two heavily plowed bridges. The request had merit due to safety, with snowmobilers crossing interstate on and off ramps, high traffic flow, and no traffic control lights. 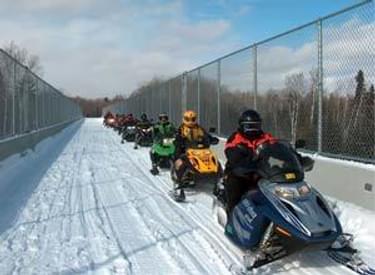 Each partner had a crucial role to play. The snowmobile clubs provided recreational use trends, local knowledge, and the drive to keep the project moving. The Snowmobile Advisory Committee pushed for approval through the MDNR. The Forest Service provided resource expertise in environmental planning and analysis. The MDNR managed the funding and standards for construction. The MDOT provided construction expertise.