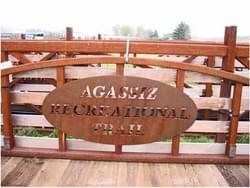 The Agassiz Recreational Trail is a rail corridor that was acquired and converted to a natural surface multi-use recreational trail.

This natural surface trail is open for walking/hiking, bicycling, horseback riding, cross-country skiing, snowmobiling, and ATV riding and is a stellar example of a trail accommodating multiple uses. The trail has several impressive river crossings and runs through beautiful rural farmland.

The local snowmobile and ATV club, the Fertile/Beltrami Sandhill SnoCruisers, partners with the Agassiz Recreational Trail (ART) Board to groom and maintain the trail. The ART Board is a collaboration of Clay, Norman, and Polk Counties. The creation of this trail, and the preservation of the corridor, were the result of a community initiative spearheaded by local club volunteers and trail advocates with the support of local and state officials. 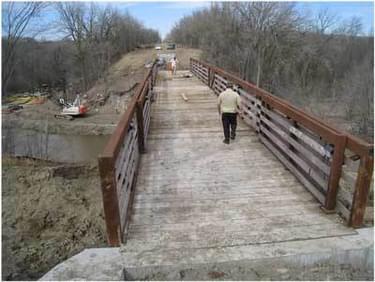 The Agassiz Recreational Trail Board has been very successful in securing the needed funds to acquire and develop the recreational trail. Unfortunately, when the rail grade was abandoned by the railroad, many of the rail bridges were removed.

The ART Board, with the leadership of trail advocates, was able to acquire funding from State of Minnesota Bonding Funds, State Snowmobile and ATV Grant-in-Aid Funds, and matching Recreational Trail Program grants to complete the connections of this trail by constructing and refurbishing several bridges.

The bridge in winter