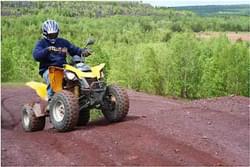 Trails were developed on the former mining area

The Iron Range Off-Highway Vehicle (OHV) Recreation Area was once a taconite mine pit in Minnesota’s Iron Range, an area that had a depressed economy for decades.

As part of the Iron Range rehabilitation, an OHV Recreation Area was developed, using $750,000 in Recreational Trails Program (RTP) funds, after a partnership was formed among the City of Gilbert, the Minnesota Department of Natural Resources (DNR) and state OHV associations.

Gilbert is part of the Quad-Cities of the Iron Range, which also include Virginia, Eveleth, and Mountain Iron. Gilbert was once known as the red-light district of the Iron Range but the town is headed in the right direction and now proudly proclaims its status as the location of the first OHV area in Minnesota. It is also the fastest growing community of the Quad-Cities,with three restaurants, three gas stations, and two campgrounds that are trail accessible.

Planning for the facility took several years. There was a technical advisory committee and a citizen’s advisory committee. These committees allowed area residents and stakeholders to voice their opinions on the OHV area. Today, the area boasts a DNR Office, a visitor’s center with a classroom for training, and an OHV wash. The area is on 1,200 acres and has 36 miles of 4X4, All Terrain Vehicle (ATV), and Off-Highway Motorcycle (OHM) trails. 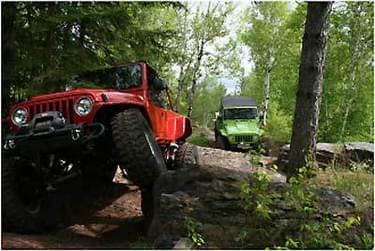 Four wheelers on the trail

Construction was completed through a partnership between the area tourism board, the community, the DNR, and OHV clubs. Most of the 36 miles of trail were constructed and signed using OHV volunteers. The OHV enthusiasts also assisted with other areas of construction such as the clean-up area and perimeter fencing.

The use of RTP funds for the Iron Range OHV Recreation Area has been a great success. The surrounding area has benefited from the positive economic impact, and OHV enthusiasts have a quality trail system.