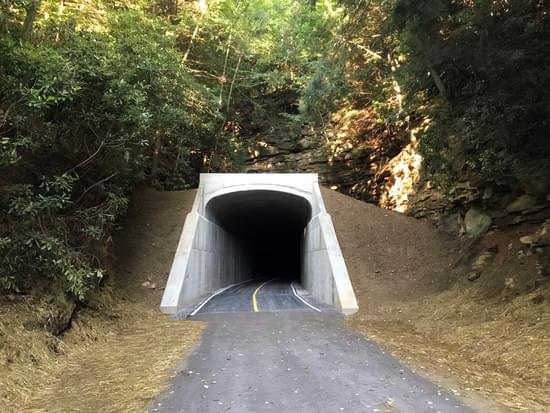 The Redbank Valley Trail is a 51-mile non-motorized, rail banked, multi-use trail in northwestern Pennsylvania. The trail is recognized as one of Pennsylvania’s Statewide Major Greenways and was designated Pennsylvania’s first "Trail of the Year" in 2014.

The trail and the completion of the Climax Tunnel was a collaborative effort between Allegheny Valley Land Trust and the Redbank Valley Trails Association.

Climax Tunnel, near Redbank Valley Trails’ midpoint was opened for trail use in 2018 after implementing five years of grant-funded improvements. The tunnel had been designated by the Pennsylvania Department of Conservation & Natural Resources as one of the state’s Top 10 Trail Gaps. In addition, the Climax Tunnel was the first of PA’s Top 10 Trail Gaps to be completed. Work on the tunnel included, steel supports each portal, uniting in the center, a buttress wall, an 80-foot extension to protect from rock falls and a paved interior surface were added to the 1876 vintage 528-foot tunnel, now 608 feet.

The Pennsylvania Environmental Council (PEC) sponsored a grand reopening celebration on August 18, 2018. More than 200 attended. PEC produced a video of the event. Use has increased since its reopening, with B&Bs seeing increased bookings. Preservation PA gave an award for preserving the tunnel and its history, https://www.youtube.com/watch?v=9tzz-1LfrzA