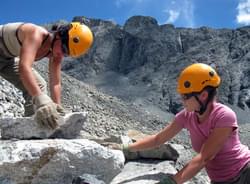 To address the damage being done to one of Colorado’s most treasured landscapes, this project focused on trail reconstruction and stabilization of the primary trail corridor.

Rising more than 6,000 feet above the San Luis Valley floor, Blanca Peak (14,345’) and Ellingwood Point (14,042’) are known for one of the more breathtaking mountain views found in Colorado. These peaks and the Como Lake Basin are popular recreation spots for hikers, backpackers, mountain climbers, and off-highway vehicle users.

Blanca Peak is a primary draw for hikers and climbers due to its ranking as the fourth highest peak in Colorado, and seventh highest in the continental United States, making it a coveted summit. The lack of a defined summit trail was resulting in the proliferation of user-created social trails, gullied and denuded areas, and severe vegetation loss in the fragile alpine landscape.

To address the damage being done to one of Colorado’s most treasured landscapes, Rocky Mountain Field Institute planned, supervised, and implemented the Blanca Peak-Ellingwood Point Trail Reconstruction Project over the 2011 and 2012 field seasons. Trail reconstruction focused on stabilization of the primary trail corridor by building rock steps, risers, retaining walls, and drainage structures; restoring social trails adjacent to the primary trail corridor and restoring associated erosion gullies; re-routing the current trail onto more sustainable ground where necessary; and delineating trail by building cairns and stabilizing slopes around the trail corridor. 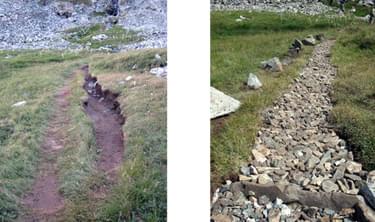 Before and after work to repair erosion gullies

In all, more than .75 miles of trail at elevations ranging from 11,500’- 13,000’ was either constructed or maintained. An astounding 583 rock steps were built to help provide stability and create a sustainable trail corridor. The work completed is of a highly technical nature and is considered very specialized in the field of trail work. Constructing trails in alpine environments requires thorough planning, a dogged work ethic, and a constant consideration for safety.

RMFI staff and trail crews worked 79 days over the two field seasons, resulting in 956 person days. Forty volunteers contributed 6,990 volunteer hours toward the project (a value of $149,306). Volunteers ranged from students representing colleges and universities from across the country to members of the Colorado Mountain Club and community volunteers who attended RMFI’s Volunteer Vacation program.

The benefits of the Blanca Peak-Ellingwood Trail Project are far-reaching, beyond the improvements made to the trail and the sensitive alpine ecosystem. RMFI utilized its highly impactful Earth Corps program to accomplish the majority of the trail and restoration work. RMFI strongly believes in the importance of developing young stewards to foster a healthy human-environment relationship into the future.

Earth Corps is a for-credit environmental service project whereby 10 college students spent a month in the Como Lake Basin. While immersed in the Basin, the students contributed to the completion of project objectives while also developing leadership skills and completing a multi-disciplinary environmental education curriculum. The Earth Corps program makes effective use of the services and skills of college students and provides experiential education opportunities for those same young adults. 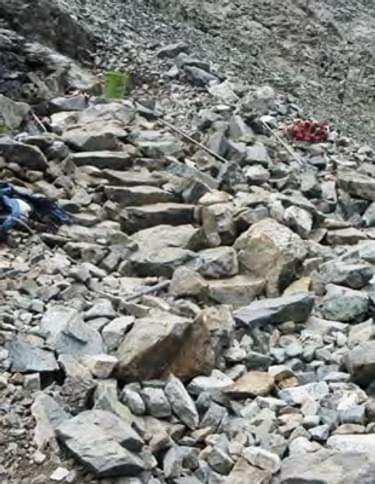 Some of the 583 rock steps built during the project

To further leverage the RTP funding acquired through the Colorado State Trails Program, RMFI secured matching funds from organizations such as the Colorado Mountain Club ($10,000), U.S. Forest Service ($6,703), and Hillsdale Fund ($3,500). Smaller grants from organizations such as Clif Bar, Dermatone, and Mountain Hardwear also contributed non-monetary support for the project in the form of trail snacks, sun protection, and climbing gear.