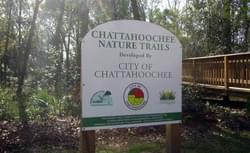 The completed project involves three trails and a new trailhead within the park’s trail system.

The City of Chattahoochee is a small rural community of 5,445, nestled on the majestic river bluffs along the beautiful Apalachicola River in north Florida. The community, located within a “Rural Area of Critical Economic Concern,” has been working to enhance eco-tourism opportunities that could provide increased economic activity.

As part of that effort, the City decided to upgrade trails in a local park which contains beautiful, diverse, and in some cases, rare plant life as well as a Native American mound dating back centuries. Under the leadership of volunteers Charles and Anne Thrash, who learned about the RTP and participated in state-provided trail-development training, the project incorporated sustainable and accessible design principles easily from beginning to end.

The completed project, which used $95,145 in 2008 RTP funds and matched it with $63,430 more, involves three trails and a new trailhead within the park’s trail system. The new trailhead offers parking, an informational kiosk, and a water fountain. The new Muscogee Trail, which leaves from the trailhead, includes a ¼ mile of new hard surface, another ¼ mile of new boardwalk, 1½ miles of new natural surface trail, and a 16-foot wood bridge.

In addition, the existing ½ mile Angus Gholson Trail was renovated and the almost one-mile-long fitness trail was given a more stabilized surface for users of the 20 fitness stations. New rest areas, informational kiosks, interpretive and directional signage were all placed appropriately along the three trails.

The Chattahoochee Nature Trails system now enjoys increased use by both residents and visitors, contributing to local community revitalization while providing a much appreciated health benefit. Based on the project’s success, plans are in the works to enlarge the trails system and eventually connect it to a nearby state park.