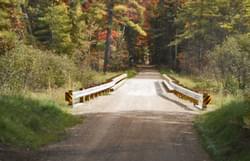 The replacement of the East and West Twin Creek bridges allow for continued safe use of motorized trails.

The replacement of the East and West Twin Creek bridges addressed soil erosion and sedimentation issues and allowed for the continued and safe use of over 140 miles of designated motorized trails in Lake County, Michigan. The Little Manistee and Lincoln Hills Motorcycle Trails and Route system provides significant off-road vehicle (ORV) and snowmobile riding opportunities on state forest lands administered by the Michigan Department of Natural Resources.

The trails are maintained in partnership with the Cycle Conservation Club of Michigan and the Irons Area Tourist Association through Michigan’s dedicated ORV and snowmobile grant programs. These bridge replacement projects were made possible by the generous financial assistance from the Federal Highway Administration through the RTP grant program, which provided significant financial support of over a half million dollars. The bridge replacements allowed for the continuous use of motorized trail facilities and allowed for uninterrupted access to local community services such as food, fuel and lodging.

The projects also provided uninterrupted access to the Carrieville forest campground. This rustic campground is specifically designated and designed for ORV enthusiasts and is a popular tourist destination. In addition, motorized trail access is provided to the Big “O” and Little “O” designated ORV trail systems on the Huron-Manistee National Forest. 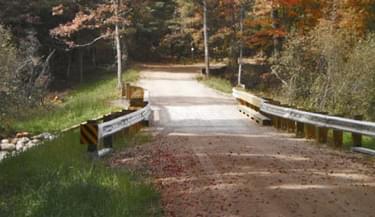 The bridge structures were engineered to sustain both highway vehicle traffic and snowmobile grooming equipment. They were also specifically designed to address soil erosion, improve trail drainage and eliminate sedimentation into the creek, improving aquatic habitat and overall watershed quality. Twin Creek is a tributary of the Manistee River that is used extensively for recreation, and offers excellent opportunities for canoeing, boating, and fishing. The Manistee River is one of the best trout fisheries east of the Rockies.