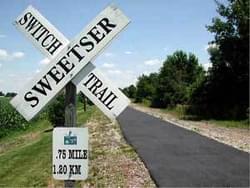 Signs on the Sweetser Switch Trail

In 2003, the small Grant County, Indiana town of Sweetser completed asphalting its three mile path called the Sweetser Switch Trail. During the first year of construction, the town of Sweetser carried out five unique steps.

One accomplishment was the the town's establishment of a parks department. While this many not seem special, it is important to note that Sweetser is so small (population 906) a parks department seems to be unnecessary.

Within a year the Sweetser Switch Trail was open, after obtaining the old rail corridor, faster than any other rail-train in Indiana.

Interestingly, this first mile was opened on a zero budget, achieved by donations of materials to build a bridge, trades of fine crushed limestone to replace heavier railroad ballast, and by voluntary labor and equipment to build the bridge and prepare the trail surface. 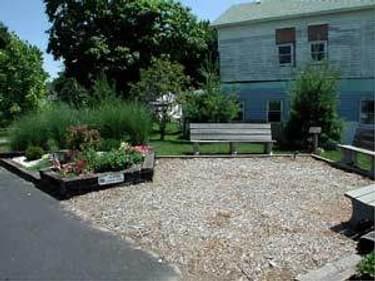 Rest stop along the trail

Volunteers were such an important factor both during construction and then later that virtually the whole town has been engaged. Also in this first phase, the community contracted a trail bridge with benches. As other phases asphalted the trail RTP funds also paid for lighting, both electrical and solar.