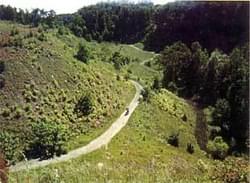 The trails of the Hatfield-McCoy Recreation Area provide a fun and exciting experience for a wide variety of outdoor enthusiasts.

The trails of the Hatfield-McCoy Recreation Area run for over 2,000 miles along the mountain ridges of the central Appalachian coal fields

Located in the beautiful Appalachian mountains of southern West Virginia, the area offers 400 miles of multi-use recreational trails, wide-open all year to ATVs, motorcycles, mountain bikes, horses and hikers. This system is one of sixteen trail systems in the country designated as a National Millennium Trail.

The Hatfield-McCoy Regional Recreation Authority works in conjunction with the West Virginia Division of Highways and the RTP to coordinate funding for their projects. Hatfield-McCoy has been approved for nearly three million dollars in funding since 1996.

Ultimately, the trail system will extend into the adjoining regions of eastern Kentucky and southwestern Virginia, covering over five million acres. There will be no other trail system like it anywhere.