The Tahoe-Pyramid Bikeway along the Truckee River

This project creates a bike-ped trail that runs the entire length of the Truckee River.

The Tahoe-Pyramid Bikeway is a long-term project to create a 116-mile bike-ped trail along the Truckee River, from Lake Tahoe (California side) to Pyramid Lake, Nevada.

The Bikeway varies in character, depending on the surrounding setting, from single track dirt to Class I paved. It is presently 55% complete and virtually all its progress has been thanks to four RTP grants over the past eight years.

The first Bikeway-government partnership was with the City of Reno and Nevada Department of Transportation. Other trail collaborators include the Truckee-Donner Recreation and Park District, Bureau of Land Management, the State of Nevada, Bureau of Reclamation, The Nature Conservancy, and two counties. 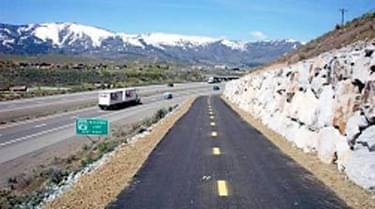 The Truckee River flows through two states, five counties, four cities, lands of three federal agencies, and one Indian Reservation. To bridge all these boundaries, a nonprofit organization was formed to spearhead the trail by working collaboratively with each jurisdiction along the route.

In 2004, $100,000 was used for a one-mile paved link from Reno to Verdi, a popular road bike ride that previously had to be traveled on Interstate 80. In 2006, $82,000 in RTP funding was spent on a 24-mile, mostly dirt trail wholly within the Pyramid Lake Indian Reservation. In 2008, $59,000 was used to build a missing one-mile link in a nine-mile dirt trail showcasing four river restoration projects east of Reno.

$200,000 of 2010 RTP funds are currently being used to refurbish a utility-owned suspension bridge over the Truckee River, which will be opened to the public in fall 2012.

Bikeway planners expect to reach 64% completion in 2012 and are counting on the continuation of the Recreational Trails Program to finish this visionary project.