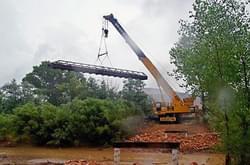 The bridge being lifted into place

Replacement of an often-flooded stream crossing with a new bridge built from a recycled 60-foot overhead crane beam to access many miles of trails for off-highway vehicle recreationists as well as nonmotorized trail users.

According to the Bureau of Land Management Kanab Field Office:

"The installation of the Kanab Creek OHV bridge and the establishment of a novice trail through the Hog Canyon Trail System has created the possibility of accessing hundreds of miles of pristine OHV trails directly from Kanab without the need of trailering OHVs to separate locations. The successful completion of the aforementioned trail projects has contributed to the reality of Kane County becoming an OHV riding destination, which has provided and economic benefit to Kanab and the surrounding communities. Many small businesses in the area are now benefiting financially because of the UT/AZ ATV Club's efforts to establish safe and direct riding to popular visitor destinations."

For years those riding OHVs were required to follow a trail up and along Kanab Creek and make a last crossing of the creek in order to reach the Hog Canyon Trails, and eventually to gain access to other connecting trails to the east. At this last creek crossing, often the water was too deep and dangerous to cross with an OHV, let alone wade, at times more than four feet deep. This caused many OHV enthusiasts to drive up US 89 along the side of the highway where highway vehicle speeds were in excess of 55 MPH and sometimes OHVs drove on the highway. This was very hazardous not only to the OHV rider, but to the Motor Vehicle operators due to the narrow Kanab Creek Canyon corridor. 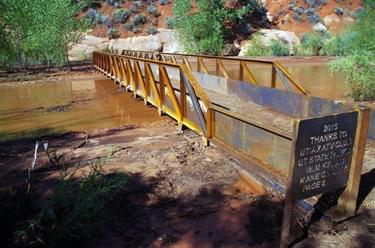 Tony Wright and Ray Wells, working through the UT/AZ ATV Club of Kanab, UT began coming up with ideas on a solution, and through their leadership and vision they began planning to build a bridge over this deep obstacle. With the support of the then ATV Club President, Jim Aziz, along with members Price Nelson, Bill Reese and other members to various degrees; a plan of action was developed.

Estimates for a new bridge were between $250,000 to $300,000, and there was no way we could make that happen. Tony Wright contacted Page Steel in Page, AZ, which suggested using a 60-foot overhead crane beam that had been removed from an industrial building in Las Vegas. A local engineer was hired to review the structure to see if it could be modified to be used as an OHV bridge over Kanab Creek.

The engineer came up with a plan that was accepted by the BLM, who were in favor of the bridge Project. Now all we needed was funding, as early estimates for the project decreased dramatically from $250,000 to less than $50,000. The bridge materials and crane beam were already being modified at the Page Steel yard, consisting of the newly reinforced bridge beam and needed ramps and railings. The Kanab Field office of the BLM was consulted for review of the finalized project plans and input was obtained with reviews of the Engineering Plans.

Overviews of the bridge plan were also presented at meetings with the Kane County Officer of tourism, the local government entities of Kanab City and Kane County. Finally, a funding request was made through the Utah Department of Natural Resources, Division of Parks and Recreation.

A Recreational Trails grant of $25,000 was awarded, with additional funding of $5,000.00 from Kane County Recreation and Transportation Special Service District along with $15,000 in kind labor and materials provided. All agreed with the overall plan because of the potential of someone getting hurt, or worse having to drive up the highway to access the trails, there was an overall consensus favoring this bridge project. 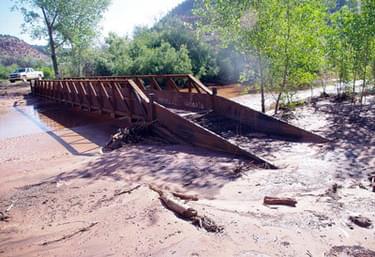 Now with funding, and concurrence with the related government agencies, the arranging of required materials and actual project coordination began. Tony Wright and Ray Wells diligently moved the project forward whenever it appeared to stall for various reasons.

The 60-foot reconstructed bridge beam was strengthened and modified at the steel yard. Footing for the bridge laid and the delivery of the 60-foot bridge scheduled. On the day the bridge was delivered to the site, a rainy summer day, the highway had to be shut down to move this large structure to the creek site. The bridge sat perfectly on the cement footings, and was secured.

Ramps were then made to access this 73-inch-wide bridge which was rated to hold 16,000 lbs. As per the request of the BLM, willows were planted along the disturbed banks of Kanab Creek and the bridge was in service. It was not long afterward that the bridge would be tested, a late summer flash flood roared down Kanab Creek and out of Hog Canyon, debris and logs pelted the bridge, the water actually went over the bridge but it withstood due to exceptional structural design, planning and quality. Tony Wright and Ray Wells organized ATV Club volunteers for another area clean-up and the bridge never went out of service to the community.

The success of the project has had a number of effects on our Kane County Community. This bridge has opened up unlimited recreational opportunities for the residents and visitors to Kanab and Kane County, Utah. The trail from Kanab has now been dramatically improved, it has made the ride on the Kanab Creek trail safe and has improved motor vehicle safety by removing OHVs from the side of the US 89 roadway. It has additionally removed the environmental impact of OHVs crossing through the waters of Kanab Creek. Tony Wright and Ray Wells continue maintaining this trail and are noted to be the sole architects of the plan and concept of this bridge. A job well done by both of them.

The office of tourism has since developed trail maps of various trails including Hog Canyon. The City of Kanab has designed OHV routes through town to reach this now accessible trail system. The new bridge has opened trail based recreation which has increased in Kane County exponentially with the community seeing new visits from out of area individuals and OHV Clubs. This bridge also opens up opportunities for equestrians, hikers, and mountain bikers to use the trails in Kanab Creek Canyon. With this bridge there has been a new branding of Kanab and Kane County as a world class OHV, equestrian, hiking and biking destination. 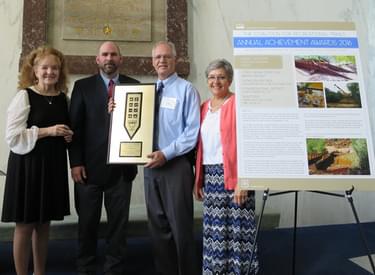