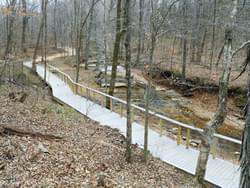 In March of 2012, Montgomery County was awarded a $120,000 Recreational Trails Program (RTP) Grant for the construction of the Rotary Park Accessible Trail Phase II in Clarksville, Tennessee. The grant required a 20% match, which was a cash match from Montgomery County. The project began, with R.L. Lafferty and Son as the general contractor, in October 2013 and was completed in early May 2014.

Rotary Park is the only true natural park in the County park system and is made up of 111 acres with five total miles of walking, biking and hiking trails of varying terrains. This particular park is special— a natural park— so all trails are constructed to minimize any disturbances to nature, including the stream adjoining the trail.

This particular trail is a great asset to the community as it is the first accessible nature trail of its kind in the County park system to reach out to many groups of individuals who wish to enjoy the tranquility of nature. The recently opened trail is approximately one-third mile in length and contains multiple surfaces including concrete, composite decking boardwalks and graded chert. 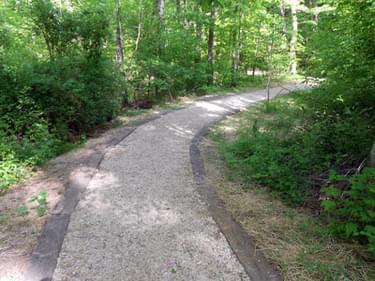 The trail encompasses resting benches, along with bridges and boardwalks, to assist in keeping the impact to the natural areas at a minimum. The trail runs parallel with the stream and uniquely crosses the stream at the upper end of the trail. Existing parking was improved to current accessibility standards with additional parking created at the new trailhead.

Rotary Park is a heavily used park that captures a very serene and breathtaking setting. The Montgomery County park system was pleased to expand its trail system and accessibility features for all to enjoy. On any given day one can visit the park to find a variety of individuals and families using the new trail. There are also multiple groups and schools that use the new trail for educational opportunities. The local YMCA brings groups of youth out twice a week for 10 weeks straight during the summer.

The trail is maintained daily by the Montgomery County Parks and Recreation Department, and the local Friends of Rotary Park frequent the park at least monthly as a scheduled cleanup day. The Greater Nashville Regional Council recently presented Montgomery County with an award for the accessible nature trail in 2014.