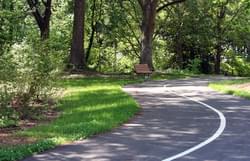 The project creates a continuous barrier-free route in Gwinnett County’s Lions Club Park and connects that loop to the accessible path and boardwalk along the City of Lilburn’s Camp Creek Greenway.

The coordination between Gwinnett County Parks and Recreation, Gwinnett County Department of Transportation, and the City of Lilburn made the successful completion of this connection possible. The barrier-free Camp Creek Greenway is very popular and receives considerable use.

The 12-foot wide paved trail is close to 1.5 miles long with a trailhead at the Lilburn City Park. When the city constructed the greenway in 2007, the trail ended on the opposite side of Rockbridge Road from Lions Club Park. Improving the accessibility of the park and trails was a key element of the project. Trail users wanting to access the park would either need to dart across the busy street or make their way through the brambles and rocks underneath the Rockbridge Road Bridge that spans Camp Creek. 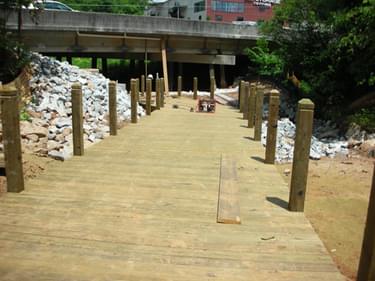 When Gwinnett County completed a master plan for the renovations at Lions Club Park, the plan called for a connection to the completed section of Lilburn’s Camp Creek Greenway. Plans for the trail included tying into the City’s existing trail, extending the trail along Camp Creek under the Rockbridge Road bridge then winding its way up to the multiuse loop within the park and terminating at the parking lot.

During the development of construction documents for the project, Gwinnett County DOT provided assistance by providing plans of the existing bridge, reviewing our plans for stream buffer impacts and assisting with water quality certification and other permits.

The City of Lilburn agreed to allow modifications to their existing boardwalk for the trail connection and worked with Parks and Recreation to establish a maintenance agreement for the trail. The city and county also worked together to create consistent signage along the greenway.

By creating a perimeter multi-purpose trail loop within Lions Club Park and connecting that loop to the terminus of the Camp Creek Greenway, a new accessible trail system was created with trailheads at both ends. This linked system significantly expanded use of all elements of the trail system and increased connectivity for the city of Lilburn. 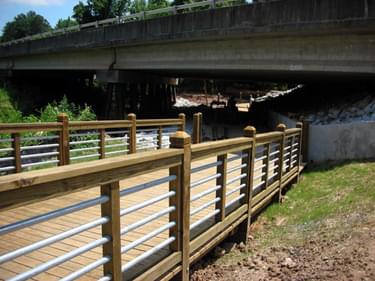 Finished bridge and underpass in use on the trail

Cooperative agreements were essential to finance this project. The original core 16.7 acres is leased to Gwinnett County by the City of Lilburn. The construction of the spur trail connecting the park’s perimeter multi-purpose trail to the terminus of Lilburn’s Camp Creek Greenway was co-funded by Gwinnett County and a Georgia Recreational Trails Program grant administered by the State of Georgia Department of Natural Resources.

The original park was just an athletic complex serving ballfield users. The completed expansion adds the amenities that bring it to the level of a community park and expand recreational opportunities as well as enhance connectivity in the area. It is the totality of the reconstructed and expanded facility turning a barren playground into a community park.

The Lions Club trail connection has greatly increased the greenway’s exposure and popularity. The City of Lilburn sponsors many festivals and activities in Lilburn City Park, such as Music on Main, Lilburn Idol, and Lilburn Daze. These events draw crowds of people to Old Town Lilburn, causing traffic congestion and parking issues on Main Street. The greenway connection allows people to park at Lions Club Park and utilize the greenway to walk or ride to the festivals. Alternatively, those at Lilburn City Park can use the greenway to walk or bike to Lions Club Park for a baseball game or a picnic. The availability of parking and restrooms at Lions Club Park are important for these events as well as the everyday use of the greenway. Sidewalk connections to the parks and greenway allow many people to leave their cars at home. Such popularity in commercial areas can lead to more greenway-oriented development in that area, such as restaurants, shops and mixed-use developments. The greenway has helped revitalize Old Town Lilburn as well as neighborhoods surrounding Lions Club Park.