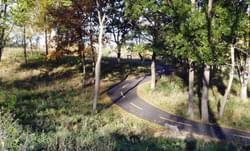 Accessible trail in the city of Middleton along a pond and wetlands includes boardwalks, a fishing pier, and an accessible launch facility for kayaks and canoes.

The Graber Pond Trail is a 0.35-mile, accessible, multi-use recreation trail constructed with porous asphalt and timber boardwalk in the City of Middleton, Wisconsin. It negotiates rolling terrain around a glacial kettle pond. The trail also fords a protected Wetland bordering Graber Pond via an 830-foot timber-decked, steel-framed boardwalk.

This trail is used by pedestrians, bikers, wheelchairs, rollerblades, dog-walkers, bird watchers, as well as snowshoers and cross-country skiers in the winter before the City removes accumulated snow. It will also be used by kayakers to access the accessible kayak launch facility made by EZ Dock found on the pond.

The Graber Pond Trail is segment of an ever-expanding network of regional trails in the City that provide off-road, safe and healthy transportation alternatives to schoolchildren and the public at large. This network allows for off-road access to multiple destinations in the City and the greater regional area. This trail is at the northern boundary of the City limits where projections predict significant residential growth in the next 20 years. This segment is part of the City's north corridor that will connect an existing regional trail parallel to Highway 12 with Governor Nelson State Park and the communities east of Middleton. 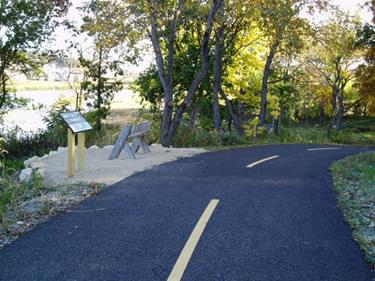 The Graber Pond Trail project was paved with porous asphalt. The locally-produced porous surface incorporates recycled materials and open-graded aggregate to produce a product that allows surface water to infiltrate the pavement. This reduces surface water build-up and makes the trail safer for all users.

The City of Middleton made the Graber Pond Trail accessible to users of all abilities for year-round activities. Great care was taken to select an alignment for the trail that used less than a 5% longitudinal slope while at the same time minimizing the loss of mature oak trees as well as the amount of necessary grading.

Habitat conservation was also an important consideration. As noted, the trail had to cross a protected wetland. The specific boardwalk was selected to avoid excavation and minimize construction impacts on the area.

The pond is home to many bird species and is a popular destination for area birding enthusiasts. In addition, the pond is home to a threatened species, the Blanding's Turtle. The wetland and conservation specialist firm, Thompson & Associates, was hired to delineate the wetland and to evaluate the design for impacts to any native species migratory and breeding concerns.

The City was the first community in the region to install an accessible kayak launch made by EZ Dock. Graber pond has a very shallow basin ideal for novice paddlers and those that are less-able. The specialized launch platform is connected to the boardwalk by a gangway and the platform is designed to raise and lower with variable pond elevations while remaining accessible.

The pier is accessible through a recently established 0.35-mile multi-use cycling and pedestrian trail that will connect the Pond, and neighboring subdivisions, with Middleton's extensive trail network. The Pond loop will also link with the Pheasant Branch Area Conservancy Trail.

The boardwalk will also be visited as a location for school field trips where classes can discuss and learn about such topics as the glacier influenced geology of the pond and region, Native American history, and the local terrestrial and aquatic animal life.