Construction of a paved, handicap accessible trail and boardwalk at the Beaman Park Nature Center.

In 2009, the Friends of Beaman Park was awarded $85,000 from the Federal Highways Administration Recreational Trails Program (RTP) for a trails project specified in the Beaman Park Nature Center master plan.

The project was to construct a paved, handicap accessible trail and boardwalk at the Beaman Park Nature Center in Davidson County, Tennessee. The grant required a 20% match, which the group was grateful to receive through an additional grant from the Memorial Foundation of Hendersonville. 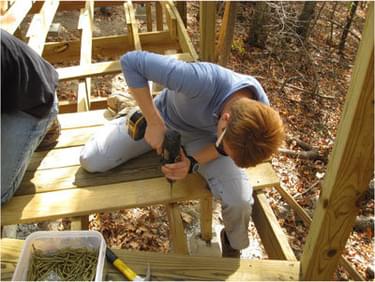 Volunteers working on the project

The Friends of Beaman Park provided grant administration and served as the general contractor on the project. The group committed to provide volunteer labor for as much of the project as possible, further stretching the benefit and value that the project provided to our community. Most expenditures were for the purchase of construction materials and supplies. The group estimates that over 1,500 hours of volunteer labor, valued at over $25,000, were used to complete the project.

The project improved the connection between the park’s new nature center and the existing trail system and was completed in 2012.