The Wetlands Bridge connects walking trails to give people of all ages and abilities a better view of the lake and wetland areas.

A 2005 RTP award was used to construct the 245-foot long, five-foot wide Wetlands Bridge out of 6x6 pressure-treated posts and composite decking. A seating area with canopy (metal roof) was incorporated into the middle of the structure.

The Wetlands Bridge was necessary to avoid significant slopes to provide opportunity for mobility-challenged individuals. The bridge connects to a ½ mile pedestrian trail encircling a lake and lies within a larger park that includes playfields, picnic areas and playgrounds. 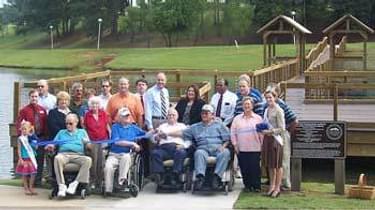