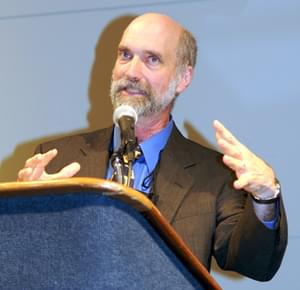 In 1989, Steve Elkinton was selected as the program leader for the National Trails System in the National Park Service’s Washington headquarters office.

Steve brought to the position a background in landscape architecture, creativity, energy, enthusiasm, and an admiration for volunteers and the valuable benefits and passion they bring to the stewardship of the system. For half of the history of the National Trails System, he has provided leadership and worked tirelessly to further the intentions and spirit of the National Trails System Act.

Steve has helped lead and guide the development of the National Trails system during his remarkable twenty-three years as program leader. Just a few of his contributions to trails are listed below:

Helped to grow the national system. At the start of Steve’s tenure there were 16 National Scenic and Historic Trails; today there are 30. The National Park Service budget for the trails was $1.1 million; today it is $14.5 million. Over 400 more National Recreation Trails were designated.

Built interagency collaboration and coordination. The National Trails System is an interagency effort. In 1990, Steve helped resurrect the Federal Interagency Council on Trails. Currently operating under a six-agency Memorandum of Understanding, the council has become a vibrant instrument for information exchange and the building of interagency trust for the benefit of all types of trails. Steve has served as the “chairman for life,” providing big hiking boots for his successor to fill.

Expanded and fostered partnerships and citizen stewardship. Partnerships are the lifeblood of the National Trails System. With a little bit of money and a lot of heart, time, listening, and perseverance, - and working with people who would not take no for an answer– Steve has nurtured the network of partnerships and fostered developing a strong network of stewardship support that has grown and strengthened the System. He has so many enduring relationships that there is a “six degrees of Steve Elkinton” in the trails world.

Increased communication and the sharing of best practices. Bringing people together for a common cause through conferences and meetings that foster exchange, collaboration, and help build a network and sense of shared community, Steve has played a key role in helping make numerous trail gatherings happen. For example, he helped lay the foundation of the Partnership for the National Trails System, a coalition of trail organizations that is the System’s prime nonprofit partner, by hosting an early critical conference. He also helped create the National Trails Training Partnership– to support professionalism and building skills for the next generation of trail managers, practitioners and advocates.

Steve (second from left) with Alan Bowen, Leo Rasmussen, and Doug Ledbetter at Abingdon, VA, May, 2011

Provided mentoring and historic knowledge. Steve is the open door, the information center, the one-stop shop for the National Trails System. He has assisted hundreds if not thousands of people and organizations over the years. He has graciously welcomed new national trails, staff members, and partners through the years, always ready to provide his “National Trails System 101” orientation. His knowledge is legendary and he has unselfishly shared it.

Promoted and advocated for trails. Building visibility and respect for the National Trails within the National Park Service, other agencies, and the public’s consciousness through communication, education, policy, and consistency has been of primary importance to Steve. His vision to shape a system out of a collection of efforts has improved the administration and management of the trails and increased knowledge, public awareness and enjoyment of them.

Increased awareness and appreciation of trails. Steve has put the National Scenic and Historic Trails on the map by developing the National Trails System Map and Guide, normalizing National Trail logo graphics and design, promoting the use of Geographical Information Systems to improve mapping of the trails, and supporting the development of the Federal Trails Data Standards.

Steve Elkinton has been a convener and facilitator extraordinaire, a trusted friend and mentor to many in the trails community and beyond as well as an invaluable resource of knowledge and information. He has helped shape, expand and protect a national system of trails that has become a treasure and legacy for all Americans and future generations. He is the epitome of a dedicated public servant– capable, respectful, inclusive, thoughtful, kind, generous, helpful, and humble. His exemplary service to the National Trails System and to trails in general is deserving of the Lifetime Service Award. Thank you for considering his nomination.

Some of Steve’s accomplishment statistics reflect the depth of his commitment and dedication to trails: