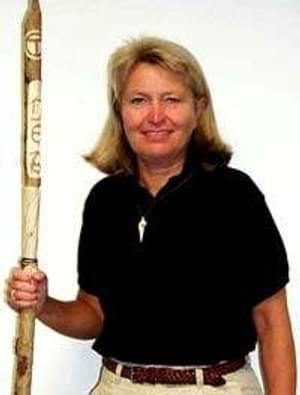 Deb Schnack's license plate says it all: "WeHike." Deb Schnack and her husband indeed hike. But not only does Deb hike, her 32 years working for Missouri Department of Natural Resources Division of State Parks have made it possible for hundreds of thousands of Missouri Citizens and tourists to also hike. Her career accomplishments are extensive and her lifetime of service as the State Trail Coordinator for nearly 28 years and as director of the Missouri Planning and Development Division resulted in 575 miles of developed trails in the state of Missouri.

One of Deb's most significant accomplishments has been her work on the Ozark Trail. The Ozark Trail is a long distance multi-use trail planned to traverse the Missouri Ozarks from St. Louis to the Arkansas border. Deb served as the Ozark Trail Coordinator. While in that role, she facilitated bi-annual meetings of trail land managers, promoted the Ozark Trail concept around the State, created trail maps, recruited trail volunteers, organized major trail workdays and publicity events and acted as the official record keeper for any and all trail-related issues. 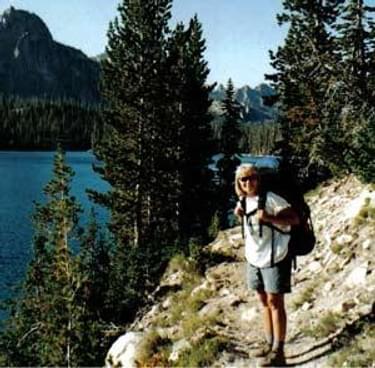 Deb Schnack in her natural habitat

Another highlight in Deb's career was her involvement in planning and developing Missouri's premier Katy Trail Park. The Katy Trail is a 225-mile long rail-trail that stretches from St. Charles in the eastern part of the state to Clinton in the western part. This trail is the longest developed rail trail project in the nation.

As a Park Naturalist, Deb has helped expose people to the wonders and beauty of Missouri's trails; as a Park Superintendent, she ensured her park's trails were well designed and maintained; and as director of the division's Planning and Development Program she has been able to coordinate additional resources for trails and has been able to hire and train a new State Trail Coordinator.