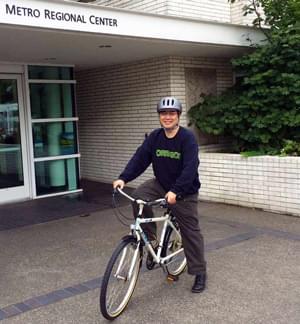 Mel Huie has been an enthusiastic supporter, advocate, and planner of trails in the Portland area for more than three decades and serves as Metro’s Trails Coordinator.

Mel Huie has been an enthusiastic supporter, advocate, and planner of trails in the Portland area for more than three decades. Mel is a founding member of the Parks and Trails Department at Metro regional government, and as Metro’s Trails Coordinator, Mel has worked on virtually every major trails project in the region.

Mel’s outstanding leadership and advocacy have increased cooperative efforts for trails, including the development of the first Parks and Trails Forum in 1988 (now the Quarterly Trails Forum), managing annual trail counts, and garnering an estimated total of $25 million for local trails.

Mel was also the project manager for the development of the Metropolitan Greenspaces Master Plan, adopted by the Metro Council in 1992 and still in use today. This plan details the vision and framework of a regional system of natural areas, open spaces, trails, and greenways.

Throughout his career, Mel has developed an astounding network of trail supporters and advocates in the region and has showed tireless commitment to making Portland a better place to walk, bike, and live.

"There is likely not a trail in the greater Portland region that Mel Huie has not had a hand in, and a foot or wheel on. We at Metro have been lucky to have had Mel on our team during the development of one of the nation’s top systems of trails. We feel it’s high time he’s recognized for dedicating his time, passion and a good part of his life to making this a better – and more walkable and bikable – place for us all. Thank you for your consideration."