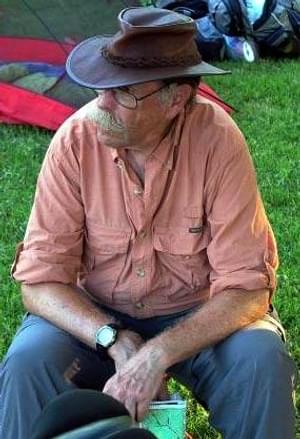 Bill bicycled to work for 40 years!

Bill was born William Baumgarten Bliss on December 23, 1935. For 40 years, Bill commuted to work from his home in San Jose to Lockheed in Sunnyvale. This coincided with his never-ending crusade for safer trails, bicycling, and bicycling facilities. Bill was tragically killed when hit from behind by a motor vehicle June 24, 2005 while riding his bicycle across the country.

Bill said, "It is not how fast you ride, all that matters is that you are moving in the right direction." This was Bill's approach to biking, advocacy, and life. He did not have to "win" a point, but he would revisit issues and stick with problems until they were solved. Always the voice of reason, Bill calmly steered those with competing points of view toward supporting each other. He would save his battles for a later day rather than offend anyone. Bill was probably the most knowledgeable bicycle advocate in California and beyond. He was very patient in explaining bicycling law, its reasoning and purpose to those with little prior knowledge.

Bill was never too busy to be a teacher. Bill served on many advisory boards, committees, and task forces, and he exemplified "service." Regardless of the number of organizations he was involved with, he regularly attended meetings and made valuable contributions.

By age 69, Bill had peddled 300,000 miles. Two weeks after retiring from Lockheed, Bill departed on a year-long trip around the world, and was one of only a few riders that rode the entire route. At his retirement party, Bill quoted the following words:

"The past is history. The future is a mystery. The moment is a gift. That is why the moment is called the present."

These words guided his life, his devotion to his family, work and the cycling community. He would still be peddling and advocating today if he'd had the chance. He made all of his moments count.