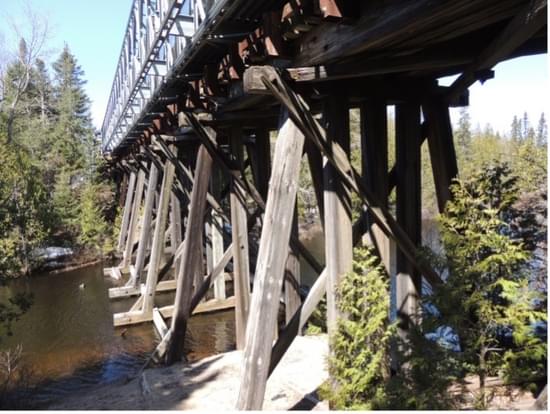 The Doty Trestle Bridge replacement was a project in the making for more than 20 years and was finally completed in March of this year. The original structure was condemned in late 1999 and the trail corridor ordered closed for all uses. Alternate routes were explored and none found due primarily to opposition by environmental groups concerned about eagle nesting and other wildlife habitat.

The Doty Bridge spans the North Branch of Stutt’s Creek on the Coalwood Grade and is a vital link in the main snowmobile trails corridor connecting Sault Sainte Marie, Michigan on the east end of the Upper Peninsula and Ironwood, Michigan at the west end, as well as multiple communities in between which depend on its recreational usage for economic stability, especially the snowmobile travel during the winter months.

Through efforts by members of the Michigan Snowmobile Association, the county commissioners, and local residents, the USFS Region 9 Director of Heritage, Wilderness, & Recreation authorized a temporary bridge erected over the original structure in order to keep the grade open. The temporary bridge selected was the Bailey Bridge, a military quick assembly portable bridge with a life span of just five years but remained in place for the entire time, and although the life span was dramatically exceeded and showing stress during the final years, it served the programs well.

Off-Road Vehicles (ORV) use this route to connect Manistique, Munising, Marquette, and many other communities, and this rail-trail is also open to non-motorized use through the Munising Ranger District of the Hiawatha National Forest which makes it vitally important to the economy throughout the Upper Peninsula.

The Michigan Comprehensive Trails Plan of 2013 states in Chapter 2 to “Ensure a sustainable trail system by maintaining trails to established guidelines” and the Statewide Comprehensive Outdoor Recreation Plan repeatedly emphasizes that the state should ensure that existing facilities are maintained in a quality fashion before construction of new facilities. The deteriorating condition of the original Doty Bridge as well as the temporary structure is visible in the accompanying photos.

This project involved cooperation between the USFS and state agencies of the DNR and MDOT, as well as supporting cooperators of SORVA of Alger County, Trail Enthusiasts of Marquette (TEAM), Hiawatha Trails Association (HTA), and the Michigan Snowmobile Association (MSA). A joint effort, the engineering and replacement was completed by the USFS, construction by MDOT, and the grants for RTP funding administered by the DNR who also provided an undetermined amount of legwork in coordinating all the activities. Because of this, the DNR is designated as the Project Sponsor.