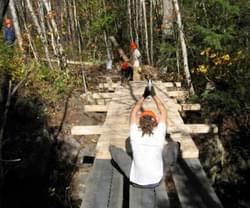 The Recreational Trails Program has made it possible to improve the existing trail system and add a new trail to the Ice Caves.

Debsconeag means “carrying place,” named by native Micmac Indians for the portage sites where birch bark canoes were carried around rapids and waterfalls. The DLWA contains the highest concentration of pristine, remote ponds in New England. It holds thousands of acres of mature forests, some of which have not been harvested in 70 to 100 years, or even more. These lands have a long history and great variety of recreational uses and today hiking, camping, canoeing, hunting, fishing, and snowmobiling on authorized trails are all welcome on this preserve. 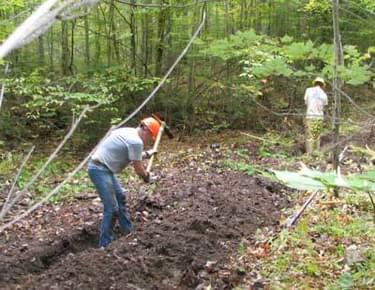 Prior to the Conservancy’s ownership, the DLWA included dozens of miles of established traditional foot trails that were etched in place decades or even centuries ago. These trails were often made by the feet of thousands of individuals – but with little benefit of modern trail planning and construction techniques. As a result, trails tended to proceed in a straight line to the destination of interest (often straight up steep slopes or through wet ground) with little accommodation for environmental protection or the comfort of the hiker.

Out of necessity, snowmobile trails proceeded through boulder fields and grooming was difficult, restricting the length of the sledding season. The Recreational Trails Program has made it possible to improve the existing trail system and even add a new trail to the previously inaccessible but popular “Ice Caves,” which allow hikers to descend and find remnants of winter well into the summer.