The Florence County Forestry and Parks Department in cooperation with the Wisconsin DNR and the Michigan DNR rehabilitated an abandoned railroad bridge over the Brule River to connect two significant regional trails in two different states. The 89-mile Nicolet State Trail in Wisconsin is connected to the 107-mile State Line Trail in Michigan’s Upper Peninsula. Both of these regional rail trails are open to snowmobiling, horseback riding, mountain biking, hiking, all-terrain vehicles, and off-highway motorcycles.

Rehabilitation of the 365-foot steel trail bridge itself was done as a cooperative effort between the State of Michigan’s DNR and Wisconsin’s Florence County. The north end of the railroad bridge had burned but was deemed safe with some additional work.

The south end needed to be rebuilt. The two units of government agreed to split the estimated $500,000 bridge rehab bill. Scope of work included construction of a 100-foot clear span bridge to be placed on top of the existing superstructure, and a 275’ wooden approach on the Wisconsin side. Wisconsin’s share of the project cost included the $126,500 Recreational Trails Program (RTP) grant, as well as a $179,330 state funded All-Terrain Vehicle Aids grant. Michigan’s share of the work was also funded with RTP grants as well as ORV trail improvement grants for a total of $40,000. 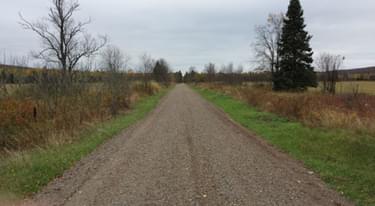 In addition to the bridge rehabilitation itself, Michigan DNR negotiated with Pacific Union to purchase 0.85 miles of abandoned railroad grade. A Michigan ORV grant funded the purchase of the grade that had been unused since the 1970s. This stretch connects Wisconsin’s Nicolet State Trail with Michigan’s State Line Trail.

The trail segments leading up to the bridge on both sides of the river also needed to be constructed or rehabbed. Florence County staff took the lead on this effort, resurfacing the trail in Wisconsin and brushing and developing the trail footprint in Michigan. Ongoing maintenance of the trail and bridge in Wisconsin is supported by additional state funded grants under the Wisconsin All-Terrain Vehicle Aids and Snowmobile Trails grant programs.

This project is an exemplary example of the major trail connections that can be developed with the aid of Recreational Trails Program grant funding. Two major regional trails were connected thanks to the availability of these funds, and multiple state and local governments worked cooperatively to achieve the end result. 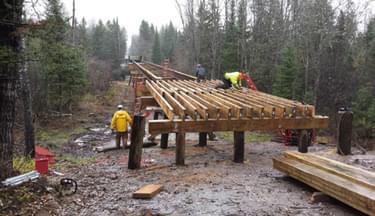 The bridge under construction

Trail safety was greatly improved through the implantation of this project. The trails former route included a re-route around the bridge and the use of nine miles of shared-use roadway. Trail users are now much safer being on a dedicated trail system.

Multiple user groups will be served by the connecting trails, including both motorized and nonmotorized users. These trail users include snowmobilers, ATVers, hikers, mountain bikers, and snowshoers.

Economic development opportunities are also expanded in the dozens of communities now connected by these recreational trails, including Gillett, Laona, Wabeno, Long Lake, and Tipler in Wisconsin, and the communities of Wakefield, Watersmeet, Iron River, and others in Michigan’s Upper Peninsula.

Grant funds were used to completely fund the development of this trail connection, and the project came in UNDER budget in the end, so the grant recipients were able to return unspent funds!