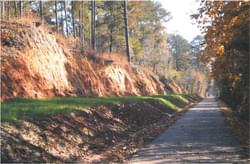 The Longleaf Trace includes an equestrian trail along the paved bikeway

The Trace's equestrian trail’s width would not allow access for maintenance equipment.

The Pearl & Leaf Rivers Rails-to-Trails Recreational District constructed and opened for use a multi-use recreational trail in September 2000, along a 43-mile section of an abandoned railroad line in Southeast Mississippi.

Immediately after the opening of the Longleaf Trace in 2000, it was discovered that the equestrian trail’s restrictive width, which would not allow maintenance-equipment access, made it impossible to maintain the minimally constructed trail due to the rapid horizontal vegetative growth that quickly closed it. Equestrian users organized a volunteer group in 2005 to open and widen the trail to approximately 15 feet. After more than a year, the volunteer group was able to open four miles to the desired width with hand tools and donated equipment. 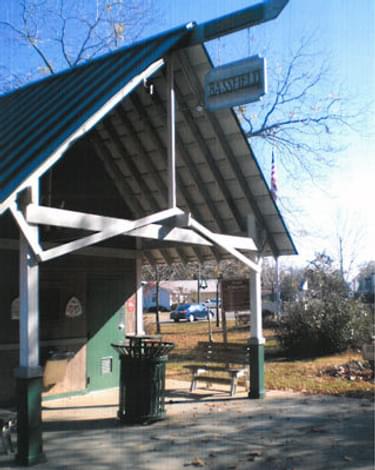 Trailhead facilities on the Longleaf Trace

In 2007, the District’s Board of Directors agreed to provide limited funding to continue improving another seven miles of the equestrian trail. The volunteer group and the Mississippi Youth Challenge Corps of Cadets from Camp Shelby, Mississippi spent numerous hours picking up and hauling debris from the trail. The District used donated equipment and its own manpower to perform the actual clearing of debris and shaping the trail. At the completion of the extension in late 2008, the District did not have the funds to continue, so it discontinued its efforts.

In 2009, a Recreational Trail Program (RTP) grant for $148,900 was awarded by the Mississippi Department of Wildlife, Fisheries, & Parks to rehab/construct 12 miles of trail. At the completion of the project, the equestrian trail is now maintainable and generally exceeds the quality of other South Mississippi trails. When an old 15-acre beaver pond was made the recreational/ecological focal point of the Trace in 2011, another Recreational Trail Program grant request was submitted to extend the native soil trail from its eastern terminus for an additional two miles to the old beaver pond.

Again, an RTP grant in the amount of $54,482 was approved through the Mississippi Department of Wildlife, Fisheries, & Parks for the extension and construction of a staging/activity pavilion at the Bassfield Station. The construction was completed again with volunteer assistance with seeding and small debris removal. The District again performed a large portion of the work. The volunteer group, through a fund-raising ride, has also provided $1,600 in support of a future primitive camp area and horse stalls near the beaver pond.