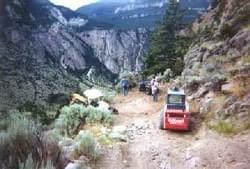 Working on the Morrison Trail

The Morrison Trail, which has actually been in place since the late 1800's, connects with the famous Beartooth Highway.

The trail is enjoyed by many different user groups, including four wheelers, mountain bikers, equestrians, canoers, kayakers, rafters, off-highway motorcyclists, snowmobilers, ATVrs, hikers and bikers. The trail also provides fire and emergency access to ranchers in the area. The broad-based interest in the trail is evident in the letters from many different user groups, as well as search and rescue workers, that were written in support of the original grant application.

The project's main goal was to preserve the Morrison Trail, reduce erosion, and make it safer for a wide variety of users. Funds were used to purchase water bars and a section of culvert and to rent the equipment needed to put this material in place. Without the added safety and access provided by this project, many different users would not have been able to continue to enjoy the Morrison Trail.