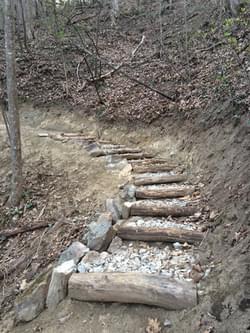 Construction involved professional trail contractors, youth service crews, and community volunteer groups. The three-mile trail is a segment of the 20-mile Upper Hickory Nut Gorge Trail that will circumnavigate the community of Gerton.

A 100-foot waterfall, dramatic rock outcropping, and charming cattle-grazed meadow are the scenic natural wonders sought out by users of the recently completed Wildcat Rock Trail in western North Carolina. But the lasting legacies of this trail will forever be the depth of public-private partnerships, ingenuity and boldness of design and construction, magnitude of new conserved lands and habitat, embracing of a non-traditional user group, and infusion of passionate youth and community in bringing it to fruition.

Begun in 2013 and finished in 2017, the three-mile Wildcat Rock Trail is the newest segment of the Upper Hickory Nut Gorge Trail, a budding 20+ mile loop that will soon continuously link a half dozen trail segments circumnavigating the community of Gerton in northeast Henderson County. This trail loop is a component of the larger, in-progress Hickory Nut Gorge Trail network— a planned 100+ mile system of hiking and biking trails that will ultimately link to Chimney Rock State Park and encircle Lake Lure.

Thanks in part to the many successes demonstrated by the Wildcat Rock Trail, this trail network was legislatively designated by the North Carolina General Assembly as the Hickory Nut Gorge State Trail network in 2017.

Machine construction, hand build, and intensive rigging rock masonry were utilized in this complex construction project across this complication of trail construction entities. Particularly sustainable trail design was completed by Conserving Carolina with especial focus on protection of the surrounding sensitive natural resource.

To overcome steep and rugged slopes of the mountain, more than 250 rock stairs and 150 locust log stairs were implemented into the design and construction of the project to ensure that structures were utilized to cover and mitigate otherwise unsustainable grades. The resulting trail is not only environmentally sustainable, but it is a work of art that offers an outstanding user experience that will stand the test of time.

While initially constructed for use as a hiking trail, since opening the Wildcat Rock Trail has proven equal utilization by a new and unexpected— but greatly welcomed— outdoor user group: rock and ice climbers. The aforementioned 100-foot waterfall has become one of the most popular ice climbing locales in the western NC region during winter and retains popularity with traditional rock climbers in warmer months. So thrilled to be meeting the needs— in an environmentally sustainable means via the new trail— of climbers, Conserving Carolina recently designated (and now manages) the cliff and waterfalls as an official climbing destination named the John Myers Rock and Ice Climbing Area. On any given weekend day, the trailhead is overfilling with vehicles made up equally of hikers and climbers. 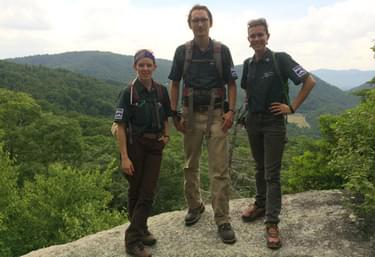 In fact, the Wildcat Rock Trail was utilized by the brand-new NC Youth Conservation Corps as a pilot project under supervision and training from the Vermont Youth Conservation Corps. Not only was quality work accomplished and more than 50 youth overall participated in the creation of this trail, the project served to get the upstart NCYCC off of the ground successfully— taking it from concept to reality thanks in-part to the Wildcat Rock Trail.

The Wildcat Rock Trail was awarded an RTP grant in 2012 for a funding amount of $75,000. This grant directly leveraged an additional $150,000 from the Donald Jones Foundation, two successive REI grants, and the Conservation Trust for North Carolina than enabled completion of trail construction utilizing six different trail building entities. RTP funding made each of these additional funding sources possible. 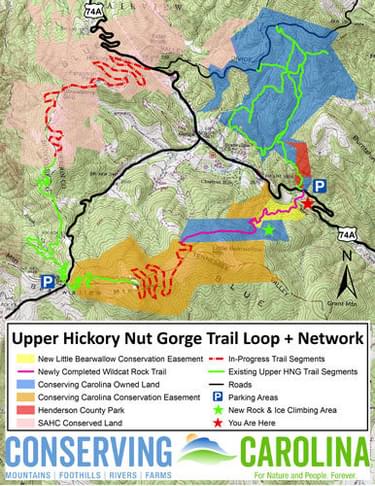 The project blended an impressive assembly of public and private partners including Henderson County Parks & Recreation (who partnered with Conserving Carolina to purchase a 35-acre trailhead tract on Highway 74A), NC State Trails Program, NC Natural Heritage Program, Community Foundation of Henderson County, National Scenic Byways Program, and many more. In particular, partnership with landowners John Myers and Jane Lawson enabled access to the first mile of trail through the acquisition (via bargain sale) of a perpetual public trail right-of-way that enables the trail to cross private property but forever host public trail users.

The Wildcat Rock Trail benefits from robust community and volunteer support. In particular, Conserving Carolina’s Rock Crushers Trail Crew has already donated more than 1,100 hours to monitor, maintain, and improve the trail. REI Asheville continues to support the project financially through its annual stewardship grants as does Henderson County Tourism Development Authority via support of trailhead expansion. Conserving Carolina employs a full-time Trails Coordinator to provide professional expertise and volunteer management in support of the Wildcat Rock Trail as well.

The Wildcat Rock Trail coincided with a conservation project that directly, forever-protected 135 acres on the north slopes of Little Bearwallow Mountain through fee simple acquisition of two tracts by Conserving Carolina.

These tracts, according to the Natural Heritage Inventory of Henderson County, were considered among the most biodiverse and highest conservation priorities in the region. The Wildcat Rock Trail traverses the tract and made funding the conservation project possible. These tracts are now contiguous to a network of perpetually conserved and public lands in the Upper Hickory Nut Gorge exceeding 1,000 acres.