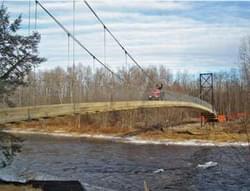 New bridge makes for a safe and environmentally sound crossing.

The town of Houlton and Aroostook Riders ATV Club collaborated to use RTP funds to construct a suspension bridge over the Meduxnekeag River and trails to connect the existing regional trail system. There are hundreds of miles of trail on both the north and south sides of interstate I-95 but before completion of the bridge, there was no legal way to cross and connect the two systems. People were unsafely and illegally crossing the river on the interstate bridge itself, or they were fording the river, causing damage to the salmon habitat. The construction of the new bridge allowed for a safe, environmentally sound crossing and connected the trail system. The bridge and connector trail were designed and constructed for multiple uses, including snowmobiles, hikers and mountain bikes as well as OHVs. 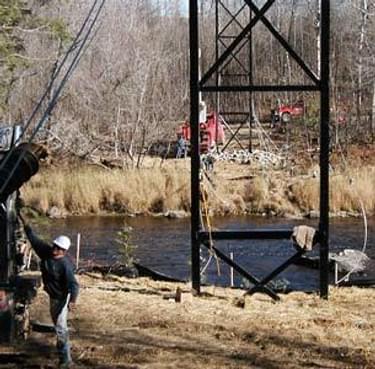 This project required the cooperation of several agencies, groups and landowners, including: the Maliseet Tribe, Bureau of Parks and Lands, Maine Department of Environmental Protection, Town of Houlton, Aroostook Riders ATV Club, the Meduxnekeag Ramblers Snowmobile Club, and private landowners who provided easements.

The bridge was needed for several years and has eliminated many problems for law enforcement as well as local businesses and clubs.