Through the Ancestral Lands program, Conservation Legacy supports trail improvement on the Mogollon Rim in the Coconino National Forest while providing jobs and experience for local Native American youth.

The national data available regarding Native American employment is bleak: more than one in four native people live in poverty and their labor force participation rate, which measures the share of adults either working or looking for a job, is 61.6 percent, the lowest for all race and ethnicity groups in the country.

Providing paid opportunities to serve communities and ecosystems, partnered with personal and professional development— authentic on-the-job experience— has proven to be successful in supporting individuals in building a foundation for future employment and success. 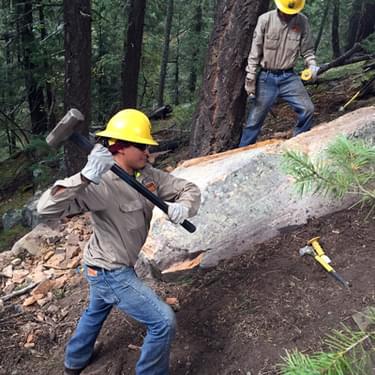 The Ancestral Lands model is rooted in the culture and heritage of local tribal communities. The power and impact of Ancestral Lands programming is due to the community investment and support for each program tribally and locally, combined with the network of operational support from Conservation Legacy.

Total projects completed in 2016 exceed 2.5 million dollars in partner and in-kind contributions. Through Ancestral Lands programming, Conservation Legacy supports the self-empowerment of Native American communities through the further development of program models across Indian Country that provide jobs and experience for local Native American youth, connect youth to their heritage and cultural values, complete important conservation and interpretation projects on public and tribal lands and for native communities, and expose Native American youth to potential careers with land management agencies. 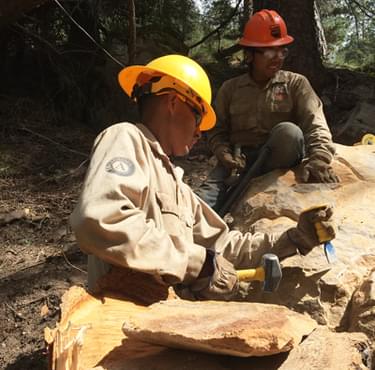 Rock work on the Barbershop Trail

Arizona Conservation Corps Ancestral Lands Crew 389 worked on the Mogollon Rim for five weeks from September to October. The crew consisted of young adults local to the White Mountains, AZ communities and came from diverse backgrounds: five White Mountain Apache, two Caucasian and one Navajo member came together to form a conservation crew working with the Blue Ridge Ranger District of the Coconino National Forest.

This crew of eight worked primarily on Barbershop Trail No. 91, constructing a switchback to equestrian-friendly specifications. The original route was a fall line trail into the canyon. The eventual goal is to build a sustainable trail down the Yeager Canyon section of Barbershop Trail. The project was a continuation of a larger project from the summer and fall of 2014. 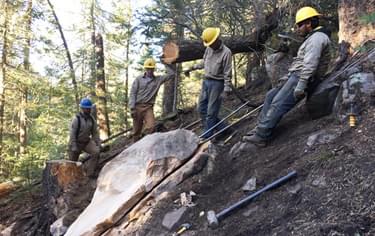 This also includes additional trail maintenance that was performed on the U-Bar trail that descends into Barbershop Canyon. Materials were sourced from the brink of the Mogollon Rim and transported to the work site via ATV and assistance from the USFS staff.

This was the first project of the term for Crew 398, the “Mogollon Monsters,” who were completely new to trail work from the start. The Corps members quickly and ably acquired and applied technical trail skills in a short window of time. When project ended, the crew left with a pride in their work which set them on the path to finish out a successful, productive, and fun term.

The transformative experience along with technical skills that each of the crew members gained will propel them through to their next opportunity with the ability to tackle their next challenge. 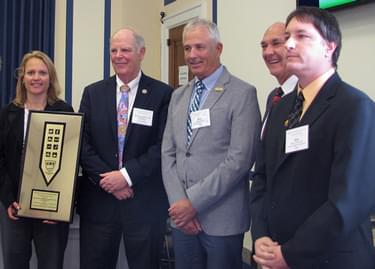 The funding secured through the Recreation Trails Program not only provides quality work needed to maintain public lands, but it also supports the personal and professional development of young adults who would otherwise not have been afforded these opportunities.

Through conservation corps programs, we can amplify the impact of project funding beyond just trail work. We can provide an experience that changes lives.

"I have been given the tools to be confident in myself. AZCC helped me realize that if I want something I need to stick it out and adapt to unforeseen situations. The Arizona Conservation Corps experience, for me, has been priceless." —Two term AZCC Alumni, Jake Follett

"From my work I have seen how it positively impacts the communities we go to. We leave the work site better than before. Our work makes us more aware of the environment and environmental issues. Being a part of this [National Service] movement leads to a lot of personal growth and transformation." —AZCC Alumni Justine Pike