Trail crew at work on the Pole Mountain Trail system

The Pole Mountain area contains trails that were never planned or maintained; instead they were worn in by users over decades of use. These trails are used by hikers, mountain bikers, and equestrians in the summer and Nordic skiers, snowshoers, and fat bikers in the winter and therefore managed for true multiple use.

Pole mountain’s year-round trail use is increasing each year because of its proximity to the population centers in the front range of Colorado, its proximity to the cities of Cheyenne and Laramie, and because of the growing outdoor recreation economy in Wyoming. Increased use on unsustainable trails has led to degradation in the area, and a need was identified to maintain and build sustainable trails that will hold up under increasing use. 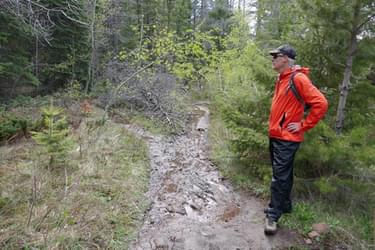 A typical problem area on the existing trail system

The need for this work was demonstrated through collaborative public processes such as a trail charrette hosted by the University of Wyoming and Wyoming Pathways, where members of the community brainstormed solutions with Forest Service representatives and through public comments received by USFS.

Once the need for trail work on the Pole Mountain unit had been determined Wyoming Pathways partnered with the Wyoming Conservation Corps to hire four conservation corps crews for 40 days work. During National Trails Day 2017, over 50 people volunteered to build sustainable trails and contribute to the Pole Mountain project. Another volunteer day occurred in September when the University of Wyoming, Wyoming Conservation Corps, USFS, Wyoming Pathways, and local volunteers completed critical components of the project.

This project was supported by a variety of organization and community members which led to the development of rich partnerships that will allow this project to grow well beyond year one, and into a long term sustainable trail program. The WCC, Wyoming Pathways, and USFS relationship expresses the power of cost-effective public private partnerships in achieving these high priority projects when financial, staffing, or other limitations may exist. 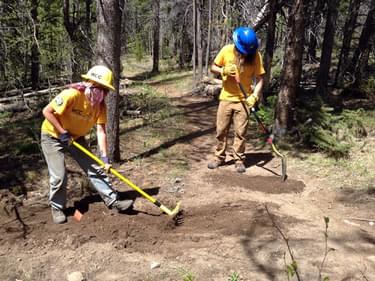 Due to the success and volunteer efforts generated by this project, the Secretary of Agriculture announced the Pole Mountain unit as one of its 15 trail maintenance priority areas to address the $300 million-dollar trail backlog as part of the “Wyoming Forest Gateway Communities" program.

The project’s success also led to the formation of an independent non-profit organization known as Common Outdoor Ground (COG) that will provide volunteer labor resources for trails projects on the Pole Mountain trail system under an agreement with USFS.

Phase 2 of this project has been approved with work beginning in the summer of 2018 to complete even more trail work on the Pole Mountain trails with volunteers and conservation corps crews. Without the RTP funding that initiated this work, this group and generally these efforts, may not have been realized.