Attaching handrails to a bridge

In 2014, the Student Conservation Association (SCA) was awarded a grant from the District Department of Transportation to complete a variety of technical projects in community and national parks in Washington, DC. The majority of the funding was awarded to build four bridges along the Rock Creek Park trail system.

As the largest park in DC with over 40 miles of paved and natural surface trails, Rock Creek Park provides residents of the District with various recreation opportunities and access to natural areas. SCA has been working with the National Park Service in DC for over 15 years to maintain trails in the park. SCA crews completed a variety projects designated in the Rock Creek Trail plan with an emphasis on providing safe and well signed access to park trails for residents in and around surrounding communities.

With this focus, SCA and Rock Creek Crew Park began the process of designing access bridges and developing a work plan in the winter of 2014. SCA wanted to use their crew based model of youth and young adults, all between the ages of 15-24, to complete the bridge construction and restoration projects.

The goal was for one youth crew of 12 students, all between the ages of 15-19, to complete one of the bridge projects in the summer, and for one Young Adult Crew of 12 members (ages 18-24) to complete the additional three bridges over 10 weeks in the fall. Additionally, we wanted to provide youth the opportunity to participate in structured hands-on outdoor conservation service work. This not only provides youth with essential career and interpersonal skills, it also provides students with a source of income for their families.

It also keeps students active and gives them an opportunity to learn about the natural environment. These are all integral components to positive youth development efforts, which help to increase social attitudes and skills. 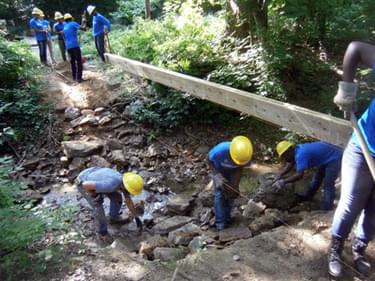 According to the Children and Youth Investment Corporation:

After creating a project plan and writing the proposal with assistance from Rock Creek Park, SCA submitted their 2014 Rec Trails Project Proposal to DDOT and were award $207,000 to implement the projects in the summer and fall of 2014.

The focus of these projects included maintaining and repairing damage to trails at multiple park units in Rock Creek Park and to improve the trail experience and user safety of citizens accessing the parks. SCA and NPS decided to rehabilitate the bridges because most were dilapidated and crossed streams that had the tendency to flood during heavy storms.

The goal was to move some of the bridges to safer locations and repair damage from years of use. By creating and repairing these bridges, SCA and NPS made it easier for surrounding communities to access to park, thus, increasing the use of trails within the park system.

Additionally, because of the poor condition of the bridges previously, trail users often went off trail to cross streams which resulted in damaging sensitive ecosystems. These new bridges make a contribution to the protection of the environment and wildlife that inhabit the park by encouraging park visitors to remain on established trails.

The first bridge project was completed in July of 2014 at Pinehurst Parkway in Rock Creek Park. The high school crew (members all aged between 15-19) built the brand new, 30-foot bridge across a creek to create a safer crossing for park visitors. The crew designed and built the bridge with assistance from the National Park Service in three weeks.

Three additional bridges were completed by the Young Adult Crew in the fall of 2014: