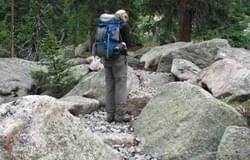 RTP funds to realign a poorly located user-created climbing route on the ascent to the 14,196 foot summit of Mount Yale.

In 2009, the Pike and San Isabel National Forests received a Colorado State Trails Grant for $170,075 in RTP funds to realign a poorly located user-created climbing route on the ascent to the 14,196 foot summit of Mount Yale.

These funds were used to leverage more than $400,000 in other federal, foundation, corporate, and individual funds. The existing user-created trail on Mount Yale followed the fall line of the mountain, leading to severe erosion and significant vegetation loss in the incredibly sensitive alpine environment.

The project included a 1.4 mile trail reroute, 2.56 miles of trail maintenance, a .29 mile section of heavy trail reconstruction, and 1.37 miles of closed social trail stabilization and restoration (including over 15,000 vegetative plugs!) 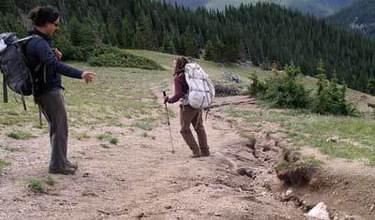 On a daily basis, crews climbed up to 2,600 vertical feet to reach their worksites. The Rocky Mountain Youth Corps spent 1,200 crew days inspiring young adults to make a difference in themselves and their communities; they also supplied over $83,000 in matching funds.

The project was completed through the efforts of multiple partners, volunteers, and the U.S. Forest Service. The Forest Service’s primary partner for this project was the Colorado Fourteeners Initiative, a nonprofit organization founded in 1994 to protect and preserve the natural integrity of Colorado’s 14,000 foot peaks through active stewardship and public education.