Mark’s expertise on a wide range of subjects from construction to trail development to horse training will leave a very tangible legacy. He took a fledging rail-to-trails project, New River Trail State Park, and made it one of Virginia’s most visited and most supported state parks. 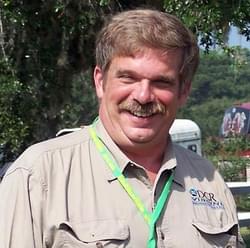 Spirit and determination were the hallmarks of Mark Hufeisen's character and guided his every movement during his distinguished 30-year career with the Commonwealth of Virginia and the Virginia Department of Conservation and Recreation.

Since coming to Virginia from his home state Ohio, Mark served admirably at five Virginia State Parks: Douthat, Grayson Highlands, Holliday Lake, Hungry Mother, and for 19 years at New River Trail State Park. Mark’s boundless energy and upbeat personality have left an impact on each of those parks and the communities surrounding them. He was admired by supervisors, staff and community leaders alike.

Mark’s expertise on a wide range of subjects from construction to rail-to-trail development to horse training will also leave a very tangible legacy to be enjoyed by state park visitors for generations to come. Mark was instrumental in converting Hemlock Haven at Hungry Mother State Park from a rundown church camp to a first-class conference center. He took a fledging rail-to-trails project, New River Trail State Park, and made it one of Virginia’s most visited and most supported state parks. Later in his career he also established the highly popular trail riding program at New River Trail.

Few in the state park system knew of Mark’s love of horses and expertise in training until an opportunity arose to establish a livery using horses transplanted from other public lands. Mark relished the challenge few others would have dared. But his work with horses and his beloved New River Trail State Park that helped buoy him during his illness. 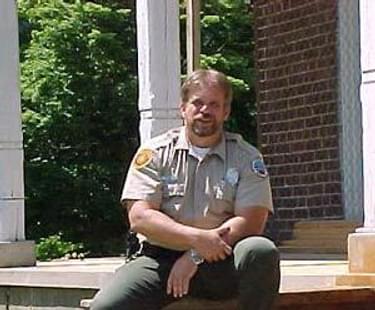 Mark Hufeisen is the Park Manager for New River Trail State Park, a 57-mile long rails- to-trails conversion is southwestern Virginia. He has been involved with the Trail in some form since it’s inception in 1986 when Norfolk Southern donated the abandoned corridor to the state. He has served as manager of the park for eighteen years. During that time, he has brought his imagination, creativity, problem solving and leadership skills to meet every challenge presented by a linear park with 28 bridges, two tunnels, innumerable culverts, dozens of crossings, hundreds of adjacent landowners, and a million visitors a year.

New River Trail State Park is a National Millennium Legacy Trail. It has been designated a National Recreation Trail by the Secretary of the Interior. It is eligible for inclusion on the National Historic Landmarks Register. Several designated historic landmarks exist within the park and many other sites qualify. The New River, that shares the valley with the Park, is the second oldest river in the world and is Virginia’s only National Heritage River. So many accolades have been attributed to this park and its environs, that it is easy to see why in 2007 over a million visitors enjoyed New River Trail State Park.

Mark Hufeisen took over management of New River Trail State Park when it was still under development. With a small crew and almost no capitol funding, he fostered public support and volunteerism within the park that helped get trestles decked, trailhead amenities constructed, donations of land, materials, and equipment, and built the park basically from scratch. Through these efforts, he converted a community loss--the loss of the railroad-- into a community asset and a major economic generator. Mark has worked with the communities along the trail to ensure they benefit from the potential of the trail to enhance their citizen’s quality of life as well as their economic future. Festivals, art and music events, competitive events, workshops and interpretive programs have woven the whole New River Valley community together with the common thread that is the New River Trail State Park.

Mark’s innovation and creativity has resulted in the development of numerous engineering and design solutions to problems faced by all rails-to-trails managers. He has been requested as a presenter at numerous annual trail conferences on a local, regional and national level. His design solutions include a special bracket that can be attached to bridge curbs to hold side safety railings more securely than traditional bolting with easier installation and maintenance. He worked with a welding shop to manufacture the brackets and then had them galvanized for long life. Many other trails now use Mark’s bracket for their bridges.

Mark designed and worked with a metal fabricator to build gates for New River Trail State Park that are heavy enough to withstand vandalism and yet are easy for emergency response and maintenance staff to open and close. The plans for these gates have been widely disseminated throughout the trail community and are used on all state park rail trails in Virginia.

Mark inherited a rail road with a cinder ballast. This surface had been down since the 1880’s and was in bad condition. Mark worked with Appalachian Power Company to arrange for the donation of bottom ash from a coal fired power plant to re-surface the trail. However, the ash was dusty and didn’t pack well, so he experimented with a range of products and found that #10 limestone screenings, when applied on top of the ash, bound together with the ash to form an excellent surface for pedestrians, bicycles, horses, and wheel chairs. Mark’s formula for trail surfaces has been used with great success in many communities throughout Virginia that have a nearby source of bottom ash.

Mark’s greatest contribution to the Trail and to the citizens of Virginia has been his vision for what New River Trail State Park could become. The Park is 57 miles long and parallels the ancient New River for over 40 miles. Mark never thought of the trail without also thinking about the river and planned and developed the park as a multi-faceted greenway and blueway intimately enjoined as one long linear park. Within the long park, campgrounds, picnic areas, sanitary rest stops, interpretive areas, accesses and parking areas were designed so that they were accessible to trail users as well as river users. Mark improved access to the New River and worked with North Carolina and West Virginia to develop a 300-mile long canoe trail on the New River that was recently printed in map form by Trails Illustrated. He has worked with the towns along the length of the trail to construct side trails and connector trails that help connect the state park to community parks and the national parks as well.

Mark has attracted employees who share his enthusiasm and commitment and has trained them to become highly competent park professionals who have been promoted to other positions in the state park system. These professionals have learned how to get great things done with few resources other than a lot of creativity and a “can do” attitude. It’s a legacy Mark is building for the benefit of all.

New River Trail State Park is one of the brightest gems in the crown of Virginia’s State Park System. It would not be such a showcase of excellent practices, imaginative design, sturdy construction, meticulous care, and satisfied trail users if not for the leadership skills and dedication that Mark Hufeisen has brought to the task of managing the park. Mark has given generously to his job, his staff, his customers, and to the future. He handsomely deserves the Lifetime Service Award from American Trails and it gives me great pleasure to nominate him for this prestigious award.