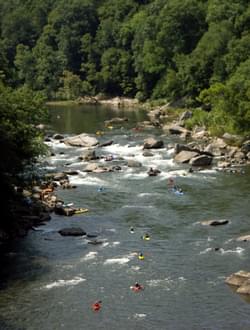 Bill collapsed and died of heart failure May 6 while bicycling on the Capital Crescent Trail near his home in suburban Washington, DC. As the National Park Service's Recreation Resources division chief and later Assistant Director for Recreation and Conservation, Bill played multiple roles in building the trails movement nationally.

He moved into the Heritage Conservation & Recreation Service (HCRS) in 1978 to operate an outstanding series of technical assistance publications. In 1981 (on Bill's birthday!), HCRS was abolished and Bill found himself in the National Park Service. A committed advocate for river recreation and protection, Bill was active with Wild and Scenic River designations nationwide.

In 1988 he was instrumental in establishing the NPS's Rivers, Trails and Conservation Assistance Program, and was also a key player in strengthening the NPS National Trails System program. Bill was the principal inspiration in 1990 for Trails for All Americans, which laid out the vision of a trail within 15 minutes of every American home. Typically, the report was a joint Federal/state/local/private effort. Bill's signature was collaboration and collegiality and he often described our nonprofit partners as our "Board of Directors."

Bill was also a key player in strengthening the whole National Trails System, building base budgets for most of the 17 established national scenic and historic trails. Bill was a unique blend of visionary and pragmatist. He believed in partnerships and grass-roots advocacy but scorned half-baked ideas that he sensed would never fly. His first rule was "only get involved with programs and projects that have strong public support."

Bill was an opinionated entrepreneur, an inspirer, a skilled budget analyst, a river rat, and visionary. He had "sparkle." He loved weird Chinese food. He took long shot chances, he scorned mediocrity, he adored his family, and he lived for the breathless "ah ha" moment at the top of a rapids or the rise of the trail. Bill Spitzer certainly left behind a world enriched for his having passed through it.

In his preface to How Greenways Work: A Handbook on Ecology, Bill wrote:

"Greenways connect. They tie together people, parks, historic sites, and natural areas. They follow streams and rivers, ridgelines, abandoned rail lines, hedgerows, canals, and other transportation corridors. All are unique, created through local initiative and reflecting a consensus of community needs and concerns. Preserving and restoring the natural world, especially near where we live and work, is one of the nation's most important conservation goals - and providing greenways may be one of the most beneficial and effective conservation strategies to accomplish it."