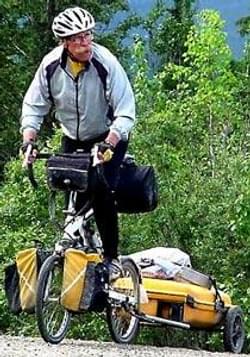 Bill on one of his bike tours.

Bill on one of his bike tours.

Bill Bliss of San Jose California on June 24, 2005 was struck and killed by a motor vehicle in Colorado while on a transcontinental bicycle tour. Bill was 69, and retired six years ago from 40 years of engineering service to Lockheed. He leaves his wife Bonnie, two daughters and a grandson.

Bill and I were Governor appointments to the California Recreation Trails Advisory Committee for many years. He was a magnificent representative of all trail users. His presence commanded respect. His kindness was always there as a calming force.

Bill has had a clear and tangible impact on cycling and trails as an influence to the good in our culture.

"He died while on a solo trip from coast to coast that was a replica of the 1976 Bikecentennial cross-country trail. Mr. Bliss took his whole family with him the first time, making his two daughters, then 9 and 7, the youngest of more than 3,000 cyclists who made the tour. Bonnie Ryder Bliss, his wife of 41 years, said he drew on paper napkins his plans for adapting a tandem bike for himself and his daughters. He raised the pedals so the girls could reach them and made the tandem a foot longer to accommodate another wheel and seat so both daughters could ride."