Jon McBride founded the National Smokejumper Association’s Trails Program. Under McBride’s leadership during the past 10 years, former and current smokejumpers rehabilitated well over a thousand miles of trails for the Forest Service and the National Park Service. 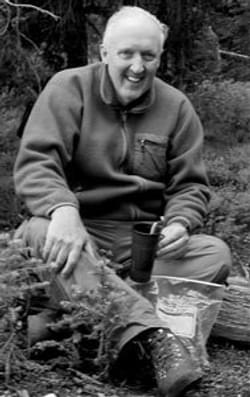 Jon McBride of Missoula, Montana was Director of the National Smokejumper Association’s Trails Program. He and fellow former smokejumper Art Jukkala founded the program in 1999. When Jukkala died on the organization’s first project that year, McBride became its director, a post he retained until his death of a heart attack on June 2, 2010.

Experienced woodsmen, McBride and Jukkala recognized that, because of budget constraints, the U.S. Forest Service was not maintaining trails as it had in the past. For example, only 800 miles of trail in Montana’s Bob Marshall Wilderness were being maintained in 1999 compared with nearly 4,000 miles of trail in the 1930s. The two men recruited 18 veteran smokejumpers for the first two projects in 1999.

Under McBride’s leadership, the program has grown each year since. During the summer of 2008, 216 volunteer former smokejumpers and associate members of the organization cleared over 100 miles of trail in six states, cutting hundreds of logs and trees that had been blocking them and restoring water bars. They also restored guard stations, lookout towers, other historic structures and built corrals and miles of fence.

The volunteers’ 2009 efforts resulted in the clearance of over 150 miles of trails with 28 projects in eight states by 318 one-week-volunteers. They also restored additional structures and built more fences and corrals.

That year also the program expanded to include lands managed by the National Park Service. Also in 2009 the program fielded the first “couples” crews that included spouses of the volunteer smokejumpers and associates.

To accomplish the work, McBride served as liaison to many national forests, the National Park Service and entities such as the Bob Marshall Foundation, the Selway-Bitterroot Foundation and several horsemen’s groups. He secured funding from corporate entities and the federal government to provide food, tools and equipment to the volunteers. 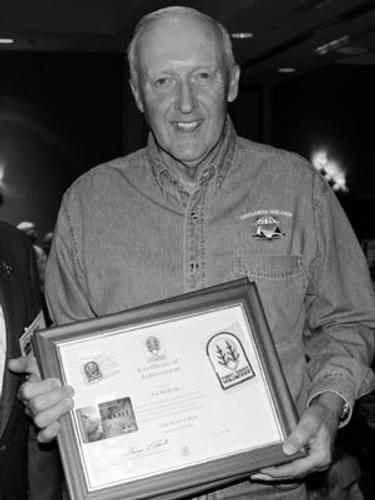 In September 2009, U.S. Forest Service Chief Tom Tidwell presented the President’s Volunteer Service Award to Jon McBride. The Gold Level service award, which included a signed letter from President Barack Obama, was given to McBride for more than 4,000 hours of volunteer work on National Forest System trails in seven regions of the agency.

His home served as the warehouse for the tools and equipment, and he formed committees to set standards and policies for the effort, in addition to delegating responsibilities to volunteers for such essential tasks as preparing menus, buying food, serving as cooks and maintaining tools.

With excess funds, he established a scholarship program to benefit children of smokejumpers killed in the line of duty or in war. He personally headed that portion of the program’s logistics operation that was responsible for transporting the volunteers to and from their respective trailheads.

McBride not only led the trails program, he was a hands-on worker too, participating in one or more projects each year. He also endeavored to meet and provide refreshments to trail crews on which he didn’t serve as they hiked from the woods after their assignments.

The University of Montana’s College of Forestry and Conservation noted that McBride attended the University between the years of 1954 and 1957. While at the school, he worked as a smokejumper and smokejumper squadleader during the 1954 through 1956 fire seasons.

After a distinguished career as a Navy and executive pilot that took him across the country, McBride returned to Missoula to retire, which he had always hoped to do.

"On June 2 of this year, the longtime friend of the College of Forestry and Conservation died of acute heart failure while on a bike ride near Missoula with a group of his closest friends. Affectionately called the “Boys of Wednesday,” the group met every Wednesday throughout the year to hike, bike or ski together."