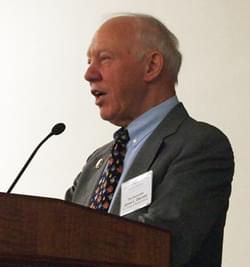 Rep. Jim Oberstar speaking to the gathering for the Coalition for Recreational Trails annual awards in 2010; photo by Stuart Macdonald

Jim Oberstar was a key figure in Federal transportation funding for many years, and he was much loved by supporters of trails and bicycle-pedestrian programs. "Every American who bikes the Minnesota bike trails, hikes the Lake Superior trail, and drives our national highways and bridges should remember Jim today," said Senator Amy Klobuchar.

Oberstar was first elected to Congress in 1975 as a Democrat and was reelected to 17 succeeding terms, serving until 2011. He served on the Transportation and Infrastructure Committee during his entire time in the House. The Democratic Caucus of the U.S. House of Representatives chose him to chair the Committee in the 110th Congress.

An avid cyclist, Oberstar championed the creation of trails for cycling and hiking to promote active lifestyles. In 2005 he authored, co-sponsored, and helped to pass the SAFETEA-LU act, which funded surface transportation and included the Safe Routes to Schools program. At the 2007 BikeWalk California conference and at other bicycling meetings, Oberstar advocated converting the country's transportation system "from a hydrocarbon-based system to a carbohydrate-based system." Rep. Jim Oberstar with Marianne Fowler, Co-Chair of the Coalition for Recreational Trails at the annual awards ceremony in 2010; photo by Stuart Macdonald

Rep. Oberstar was often in attendance at the Coalition for Recreational Trails annual awards ceremonies, which are held in early June at a House of Representatives meeting room.

Oberstar, a Minnesota native, graduated in 1956 from the College of St. Thomas in St. Paul. He received a Master's degree in European Studies from the College of Europe in Bruges, Belgium with further study at Université Laval in Sainte-Foy, Quebec, and Georgetown University in Washington, D.C. He spent four years as a civilian language teacher in the United States Marine Corps, teaching English to Haitian military personnel and French to American Marine officers and non-commissioned officers.

Oberstar, the longest-serving congressman in Minnesota history, died unexpectedly early May 3, 2014 at age 79.