After 40 years with the U.S. Forest Service, Austin Helmers' second career was his passion for hiking and making sure Alaskan trails rights of way were not lost. 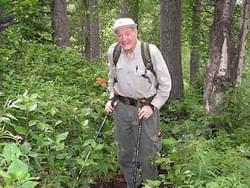 Longtime Alaska resident, Austin Helmers, 93, passed away Friday, March 5, 2010, at the Palmer Veteran's and Pioneer's Home surrounded by family. Austin was a research forester for the U.S. Forest Service, and a lifelong outdoorsman and public trails advocate for both Idaho and the Matanuska Valley.

Austin was born August 30, 1916, in Doon, Lyon Co., Iowa, to Edd and Marie Shroeder Helmers. He was raised in Idaho and Montana, where he learned all the operations of logging and the forest from his father. He was an undefeated log roller who took on all challengers and an avid hiker who climbed to many a ridge top.

Austin and Geneva Maxine Wortman were married in 1940, while both were still in college. In the early 1940s, they moved between Missoula and the Forest Service Station at Deception Creek, near Coeur D'Alene, ID, and finally to the Experimental Forest Station near Priest River, Idaho. While at Priest River Experiment Station, they became involved in square dancing, which would continue throughout their lives.

Austin was an alumnus of the University of Idaho at Moscow. He completed a master's degree in Plant Ecology and Research. During his college years, he worked with the Civilian Conservation Corps to fight the spread of White Pine Blister Rust. Part of his U.S. Forest Service research career included working with the U.S. Army Corps of Engineers, performing soil and snow trafficability tests of military vehicles. One of the highlights of working with the Corps was spending a summer on the Greenland Icecap. He moved his family to Alaska in 1957, to do watershed research in the Tongass National Forest and the Juneau Icefields. 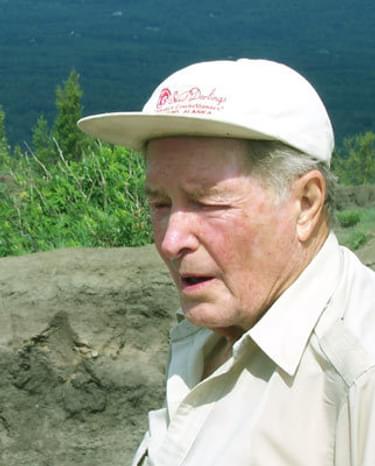 In 1971, the Helmers moved to Fairbanks, where Austin continued his research on the boreal forest at the Institute of Northern Forestry located on the University of Alaska Fairbanks campus. In 1976, after his 40-year career with the U.S. Forest Service, Austin and Maxine retired to Coeur D'Alene, ID. In 1978, they returned to Alaska and settled in the Matanuska Valley. Together they grew immaculate gardens with two-story pea vines and a huge raspberry patch, surrounded by stunning flowers and well tended trees. They continued their enjoyment of Square Dancing as members of Paws and Taws Square Dance Club in Palmer.

Austin's second career was his passion for hiking and making sure public trails rights of way were not lost. He was instrumental in establishing the Pioneer Ridge Trail, the public route up Pioneer Peak which was dedicated to him in 2004. He also mapped and secured the Matanuska Peak Trail, the Morgan Horse Trail on Lazy Mountain, and the Crevasse Moraine trail system.

The first Mat-Su public trails plan to serve many users was put together due to his field research. Austin observed the Alaskans' greatest freedom was on public lands and rights of way, and his greatest concern was fencing and the loss of easements would be the ultimate lockout to the people. To him, access to the mountaintops was nearer to God and peace, his family said. He climbed frequently until he was 90 years old, often with a hatchet, saw and batch of trail markers.

Austin was instrumental in forming the Mat-Su Trails Council. He was appointed to the Governor's Trails and Recreational Access Board for Alaskans in 1996. He was presented numerous awards in recognition of his volunteer efforts on the local, state and national level. Austin was a wonderful role model and taught his family the importance of good work ethic, respect for nature and pride for country, his family said.

Austin was preceded in death by his wife, Geneva "Maxine", in 2008, also a resident of the Palmer Pioneer's Home; and two sisters, Lois Humphrey and Eulaine Naiden. He is survived by his daughters, Nancy (David) Thomas of Palmer and Geri (John) Paden of Texas; son Thomas (Teri) Helmers of Fairbanks; grandchildren, Scott and Steve Thomas, Kelli Toth, Jessica and Leslie Helmers, and Ashley Wages, all of Alaska, Kierstin "Kitzel" Waara of Michigan; Brandi Deems of California, Marilyn Smith of Utah, and twelve great-grandchildren, as well as numerous nieces and nephews.