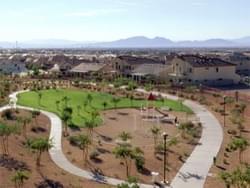 Located along the western rim of the Las Vegas valley, Summerlin is a 22,500 acre planned community accommodating 95,000 residents. The development includes over 150 miles of trails within its comprehensive trails network.

Developed by The Howard Hughes Corporation, an affiliate of General Growth Properties, Inc., Summerlin began to take shape in 1990 and has consistently ranked in the country’s top 10 best selling master-planned communities.

Homes are available in a variety of styles - from single-family homes to townhomes, condominiums and lofts - priced from the mid-$200,000's to more than $2 million. Custom homesites in The Ridges are priced from the $500,000's. Luxury apartment homes offer monthly rents starting from the $900's.

The Howard Hughes Corporation received the American Trails Developer Award on November 17 at the National Trails Awards Banquet and Symposium in Little Rock, Arkansas. The award recognizes developers who establish quality, well-designed, multi-use trail systems within private developments. It is the only award of its kind in the nation.

According to Jim Wood, executive board member of American Trails, The Howard Hughes Corporation is well deserving of the inaugural American Trails Developer Award. “Summerlin’s extensive trail system is a model of efficient planning, design and public and private partnerships,” said Wood, of the community’s 150-mile trail system that connects neighborhoods to amenities throughout Summerlin and the greater Las Vegas valley. “It takes public and private partnerships to establish a comprehensive trail network that provides access to trails from the doorsteps of American homes. The role of private developers is more critical than ever, particularly in light of the fact that trails are the number one community amenity homeowners seek when buying a home according to the National Association of Homebuilders.”

The Howard Hughes Corporation conducts routine resident surveys that echo this claim. “Trails rank well ahead of parks, golf courses and other recreational facilities in terms of both use and popularity among our residents,” said Tom Warden, senior vice president of community and government relations for The Howard Hughes Corporation. “Our last resident survey indicated that approximately 70 percent of respondents use the trails at least once every few weeks. On any given day, thousands of Summerlin residents can be seen walking, running or cycling on one of the community’s trails.”

The Summerlin Trail System includes five types of planned trails: street-side, village, bike, regional and natural. Street-side trails serve as the backbone of the community’s trail system. They are always landscaped on both sides, set back several feet off the road and vary in width from five to eight feet. They are designed for both serious and casual users, from joggers and walkers to kids and families on casual strolls. 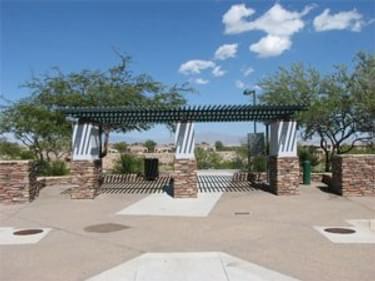 According to Warden, Summerlin is well known for its tree-lined, street-side trails. “It’s a hallmark that originated with the development of the community’s first villages and one that continues to distinguish Summerlin from other community’s throughout the Las Vegas valley,” he said.

Village trails are eight feet wide and are often located in natural arroyos or man-made open space corridors. They are located in off-street areas and designed to serve long-distance walkers and runners, as well as cyclists and skaters. The trails that run the length of The Pueblo and The Trails villages, as well as the trail that meanders through Cottonwood Canyon Park, are examples of village trails that accommodate active use and provide respite from the noise and traffic of busy streets.

Dedicated bike routes and striped bike lanes are the third kind of trail within the Summerlin Trail System. Typically four to six feet in width, bike lanes are located on arterial and collector roads that link villages. They are designed to serve more experienced cyclists.

Regional trails are part of the proposed valley-wide trail system and are planned along the eight-mile 215 beltway corridor and flood control channels. The regional trails will provide a link to Bureau of Land Management land in Red Rock Canyon National Conservation Area and are being designed for multiple, non-motorized uses. They will be constructed as a public and private partnership by Clark County and the city of Las Vegas in cooperation with The Howard Hughes Corporation.