Do you know of a longer paved trail anywhere? a longer skating trail? other record trails? Let us know at [email protected]! 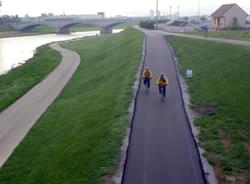 5. We believe the Trail of the Coeur d'Alenes in Idaho is the fifth longest at 73 miles of paved path. It follows the Union Pacific Railroad right-of-way from Mullan, a mountain mining town near the Montana border, to Plummer, a town on the prairie near the Washington border. See the Friends of the Coeur d'Alene Trails and the Idaho Parks and Recreation website for more on the trail.

4. The fourth longest paved trail is now Ohio's Little Miami Scenic Trail, which has been extended to 75 miles. Also, The Little Miami is part of one of an extensive regional trail network: 330 miles of paved, interconnected trails. See details at www.miamivalleytrails.org

3. Iowa's 89 mile Raccoon River Valley Trail takes you through woodlands, prairie and agricultural landscapes. The route forms a loop through several rural communities with a long tail coming off the loop on its northern end that heads to Jefferson, as well as another tail on its southern end that heads toward Des Moines.

2. The Chief Ladiga and Silver Comet trails extend 94.5 miles on a single abandoned railroad, and form the second longest paved trail in America. The 33-mile long Chief Ladiga Trail is on the Alabama side, traveling through the Tallegeda National Forest, and connects at the Georgia state line with the Silver Comet Trail which continues 61.5 miles east to Smyrna, Georgia.

1. The NEW champion is the Paul Bunyan Trail which is a continuously paved trail from Brainerd, Minnesota to Lake Bemidji State Park in Bemidji— a total of 112 paved miles.

The sixth-longest paved trail: The Willard Munger State Trail extends 63-miles between Hinckley, Willow River, Moose Lake, Barnum, Carlton, and Duluth. The trail passes near Banning State Park, through Finlayson, Willow River and General C.C. Andrews State Forest, and through the spectacular scenery of Jay Cooke State Park. The northeast portion of the trail provides scenic views of the St. Louis River and the twin ports of Duluth and Superior.

The Willard Munger State Trail is a collection of multiple use trails between Hinckley and Duluth. It consists of interconnecting trails offering hiking, bicycling, in-line skating and snowmobiling. It highlights the picturesque scenery and rich history of East Central Minnesota. The trail follows the route of the railroad that saved many lives in the historic Hinckley and Cloquet fires in the nineteenth century. There are three different trail segments in the Willard Munger State Trail: Hinckley - Duluth segment, Alex Laveau Memorial Trail and Boundary segment. See maps, history, and more on the trails at: http://www.munger-trail.com/

Lake Morey, Fairlee, Vermont is home of the longest ice skating trail in the US. Every year in January the Annual Lake Morey Skate-Athon takes place on the four-mile round trip groomed trail.

Do you know of a longer paved trail anywhere? a longer skating trail? other record trails? Let us know at [email protected]!