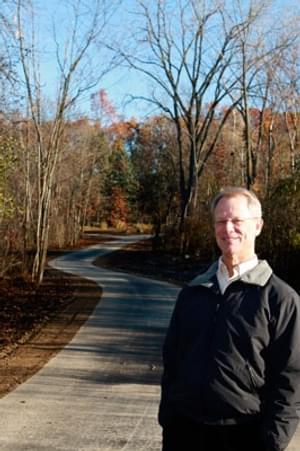 Roger Sabine’s impact on the burgeoning West Michigan Trails movement began in the 1980’s with the development of an idea that would lead to Kent Trails.

Kent Trails is a 15-mile trail partnership between six municipalities. This successful collaboration set the stage for Roger’s approach to trail development in the decades to come.Roger identifies opportunities, builds consensus around vision, motivates and empowers people, assembles resources and hammers away at obstacles until the vision is realized. In short, he brings the pieces together and assembles the puzzle. While the West Michigan Trail community has benefited immeasurably by his career’s work, the past two years especially have been incredibly productive.

Established by a 1991 agreement between six municipalities spear-headed by Roger Sabine, Kent Trails is a 15 mile paved multi-use trail linking several parks and communities. Through the original agreement, partners shared operating expenses and contributed annually to a reconstruction fund. When it came time to repave and improve the trail 20 years later, Roger secured a $440,000 grant to supplement the reconstruction fund. He also convinced all partners to contribute a total of $150,000 in additional funding during tough economic times to improve the trail experience. The reconstruction of the trail was completed in autumn of 2010. The following year, Roger successfully negotiated a renewal of the expiring 20 year agreement, re- invigorating the partnership on this core West Michigan trail for another 20 years.

Millennium Park includes 1,500 acres of natural and reclaimed land straddling four municipalities. The park’s initial development featured a popular 60 acre mixed-use recreation core. Three multi-use community trails approached the park border, but no trails were available within the park to connect these trails or bring trail users to the recreation core. Roger outlined a vision for a network of nearly 20 miles of trails within the park to make these connections. He brought community leaders into the project and worked closely with them to secure needed approvals. Donors privately funded the entire project, and Roger successfully negotiated with land owners to secure easements and complete a land swap at critical location. In August, 2012, construction on the Fred Meijer Millennium Park Trail Network was completed, creating a vibrant trail hub at the center of the Standale, Kent, and Grand River Edges Trails. 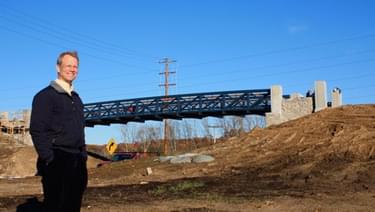 Roger Sabine and the bridge over Maynard Avenue

Another of Roger’s inspirations, the Fred Meijer M-6 Trail stretches across southern Kent County, linking communities, trails and parks east to west. Where possible, this trail route was planned to follow the M-6 Highway right-of-way. After much persistence and coordination between agencies, municipalities, private donors and trail groups, Roger gathered the funding and approvals to construct the east and west ends of the trail by Fall 2009.

At the center, a gap of less than two miles remained, including a challenging crossing of a congested five-lane road, aptly named Division Ave. With use of the new trail skyrocketing, Roger set his sights on creating a safe crossing of Division. In 2011, he convinced a community foundation to contribute needed local funds to match Federal Transportation funding already in place. He then worked with the local Road Commission and other agencies to design the bridge and secure needed permits. At a total cost of more than $550,000, construction on the new bridge began in the winter of 2011-12. With east and west regions of the County divided by major traffic arteries, this bridge will provide a safe and vital link in the regional West Michigan trail network.

To the east, the M-6 Trail ends at the Paul Henry Thornapple Trail, a 42 mile trail being built in phases leading southeast out of Grand Rapids. Within Kent County, a two mile gap effectively separated the urban trail network from more rural and suburban communities. Roger spent years negotiating with landowners, municipalities and affected agencies to try to bridge this gap. In 2011, he succeeded in forging an agreement and secured the necessary funding from a combination of sources. Thanks to his tenacity and commitment to a long-standing vision, construction on this link between the city and the country began in 2011 and was completed this past summer.

Northwest of Grand Rapids, Roger saw the opportunity for another pivotal trail connection. The Musketawa State Trail runs from western Kent County to Muskegon, connecting to a trail network linking scenic communities along the Lake Michigan shoreline. Together, these trails total 70 miles. In Grand Rapids, the Fred Meijer White Pine Trail State Park runs north through Michigan, linking to the Pere Marquette State Trail and others for a combined 150 trail miles. In Kent County, the ends of these two networks were separated by less than ten miles. In 2006, Roger worked with Congressman Vern Ehlers to secure Federal Transportation funding to bridge the gap between these two extensive trail networks. Designing a route through busy commercial and agricultural areas proved challenging. Yet, with tenacity and commitment to the vision, Roger helped forge a partnership and, ultimately, build consensus between the Michigan DNR, two counties, a city, a road commission, private landowners, a trail group and a private foundation. Work on the new trail began in the summer of 2011. Honoring trial philanthropist Fred Meijer, this new connector trail forges a continuous network of trails totaling more than 230 miles.

Roger recognizes that successful trails result from successful partnerships, and that successful partnerships need strong partners. To this end, he has dedicated himself to mentoring, assisting, cajoling and empowering trail groups and volunteers. He steps in to offer skills, expertise, influence and advise where needed, and steps back to let others succeed in completing trail connections using the tools he’s helped them find. Trail groups know they can rely on Roger to help them put the pieces together to achieve their vision. During 2010-2012, Roger continued to serve on a Community Action Committee encompassing Kent, Ionia and Montcalm Counties. During this time, Roger’s assistance on this committee was invaluable in acquiring a 37.5 mile rail corridor and raising the $2.3 million needed for the purchase. Once trails are developed along this route, the resulting multi-use trail network will be one of the largest in the nation. Roger also worked with a private trail group, a national railroad corporation, and government agencies in negotiating the acquisition of another rail corridor to provide an important link through southeast Kent County for the 4,200 mile long North Country National Scenic Trail. This purchase had been in the works for nearly 15 years, and was finally negotiated successfully in 2012.