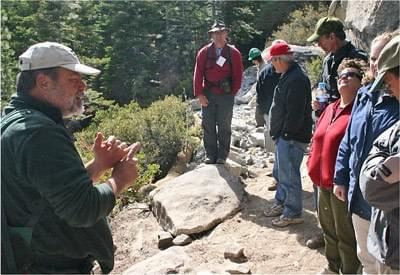 Karl Knapp talking to State Trail Administrators from around the country

Karl Knapp is nominated for the Trails Public Service Award in recognition of the leadership and vision he has brought to his work with California State Parks over his 35 year career.

Karl’s contributions have strengthened California’s system of trails by setting and maintaining high standards for trail planning, design, and implementation. At every level of his work, Karl has developed creative strategies to address challenges and worked to implement his approaches within State Parks and with other agencies.

Karl’s leadership begins at the front end of the trail planning process where he builds consensus among diverse trail user groups. He has facilitated contentious public meetings, listened thoughtfully to different trail user groups, worked through conflicts, and developed plans that work for all stakeholders. Karl follows through— gathers data, motivates people, assembles resources and chisels away at obstacles until the vision is realized.

Karl started to address problems and replicate his solutions early in his career. His Road and Trail maintenance program for Prairie Creek Redwoods State Park was adopted for use statewide. He was instrumental in the development of the Trails Handbook and the Trail Design and Maintenance training series that is used nationwide. Later, he responded to the need of trail managers to accurately plan, quantify and substantiate the cost of maintaining trail systems. In the past project estimating has often ranged from guesses to over-simplified costs per mile that often failed to take into account the number or types of trail structures needing maintenance.

Karl designs trails that uniquely capture a particular aspect of a park to enhance the experience of visitors. He sees the big picture. For example, when assigned to remove a tree hazard at Mt. San Jacinto State Park, Karl observed extensive erosion and park degradation caused by hikers using multiple unofficial trails. Karl created a plan to address these issues and brought in the CCC to implement the trail work necessary to address the cause of erosion in the fragile ecosystem. He is a master at woodcraft and has the technical skills at the core of the “park rustic” style.

He has preserved historical trail construction practices which were being lost as an older generation of park craftsmen reached retirement age. Karl researched, resurrected and reinvented these techniques and trained others in basic skills augmented with modern technology. Watching him move a multi-ton redwood log with a few cables and a griphoist and place it precisely to build a trail bridge is like watching any artist in action. The rustic bridges he designed in many parks adds immeasurably to the trail experience. His techniques are taught to the younger generation in the California Conservation Corps, preserving historical trail construction techniques.

Karl has improved the accessibility of California trails by developing a survey tool which is used throughout the California. This survey tool, along with the planning and trail estimating processes has resulted in the planning and implementation of ADA compliant trails in remarkable locations including Point Lobos where the Bird Island Trail, constructed by the California Conservation Corps to be accessible by wheel chair, skirts a bluff at the edge of Monterey Bay, providing visitors with dramatic views of the Pacific Ocean.

Karl has been committed to training and is one of the lead trainers for the trail training program at California State Parks William Penn Mott Training Center. He has provided training for Denali, Grand Canyon, and Big Bend National Parks and the Las Vegas Field Office, Bureau of Land Management, and is integrally involved with the National Trails Training Program sponsored by the Federal Highways Administration and coordinated through the Bureau of Land Management and the United States Fish and Wildlife Service. Karl has helped develop college accredited training through the College of the Redwoods and Monterey Peninsula Community College, United States Forest Service, State and National Trail Conferences, National Center on Accessibility, Beneficial Designs Inc., Whole Access, and other agencies.

His commitment to training and development extends to the next generation. Karl has fostered a long-standing partnership between State Parks and the California Conservation Corps. Under Karl’s leadership, State Parks has invested $4-$6 million dollars per year in this partnership that includes training CCC staff to achieve high standards and the development of the young adult members of the CCC through trail work experience. CCC crews have incorporated the construction and management skills described above and have completed work on many of California’s signature trails. During the period of this nomination, the CCC worked on 28 trail projects including trails at Emerald Bay in Lake Tahoe, Mt. San Jacinto, Garrapata and Torrey Pines state parks. As testament to Karl’s long-range vision, all but one State Parks trail workers got their start in the CCC.

Karl is a recognized leader, freely sharing this expertise with Counties, Park Districts and other trail advocates at the state and national level. He continuously teaches and mentors employees at every level. To overcome funding obstacles he developed and taught Grant Writing classes to support trail endeavors. Author Kevin Meyer in his book Designing Sustainable Off-Highway Vehicle Trails, noted that Karl has “honed the science of trail management to a fine edge.” According to California State Parks Acting Director Lisa Mangat, “it has been a pleasure to work with Karl over the past year. His knowledge and experience has helped me gain an understanding of the complex State Park system in a short amount of time. I am pleased that he is being recognized for his steadfast dedication to California State Parks as we have all benefited greatly from his leadership.”

Karl graduated from Humboldt State University and worked his way up through the ranks. He served as a Park Aide, State Park Ranger, Maintenance Worker I, II, CCC Conservationist I, Park Maintenance Supervisor, Park Maintenance Chief II and III, Staff and Senior Park and Recreation Specialist. He worked in the Facilities Management Division as Road and Trails Manager before joining Executive Management. But he is no desk manager— he makes time to get out on the trails. His hard work, tireless advocacy, and dedicated leadership has impacted thousands of visitors using the 4,456 miles of non-motorized trails in California State Parks.