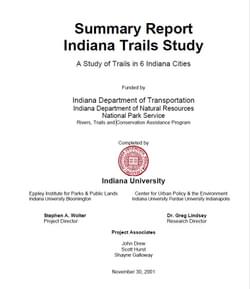 The six communities and trails studied were:

The Indiana Trails Study was designed to obtain attitudes and opinions from those property owners who lived adjacent to the trail, known as trail neighbors. It was determined early that the best method to survey the trail neighbors was a sample of all adjacent property owners as provided by the trail agency. Each agency was asked to provide a listing of trail neighbors from their city records so that all neighbors, as defined by the local trail agency, would receive the mail survey. Response rates from the trail cities ranged from 38% to 51% after follow-up mailings; with an average response rate

Living near the trail

These two opinions of trail neighbors, who owned their property before the trail was developed, indicates that living near a trail would have a positive or neutral impact on quality of life in the neighborhood. Living near or adjacent to a trail can make it easy to use the trail. Trail neighbors were asked to document the amount of use and time of year during which they or members of their household may have used the trail. Overall, trail neighbor use ranged from a low of 1.43 to a high of 3.1 days per week. Seasonal trail use reflects the highest activity level in summer, lowest trail use in the winter, and moderately high use levels in spring and fall.

Between 70 and 95% of trail neighbors reported they used the trail. This information reinforces the emphasis that trail neighbors find trails to be relatively good neighbors and very convenient for members of their households.

The survey of trail neighbors in the Indiana Trails Study provides valuable and important data regarding trail neighbor opinion, attitude and issues for future trail development and management. The survey indicates that:

The Indiana Trails Study originally designed a focus group research protocol with local realtors in each city as a means of measuring trail impacts on real estate. After poor attendance at focus groups, and to reduce time and data collection costs, a change was made in research methodology to conduct individual telephone interviews of realtors in each city. The individual telephone interviews were conducted between November and December 2000 with at least 10 realtors in each community. The results of this qualitative research were recorded for analysis April 15, 2007emerging trends from all six trail cities included:

A review of the Trail Summary Data Tables in Appendix A reveals there is a significant amount of similarity between the users and neighbors of all the trails studied in this project. In fact, it is difficult to find differences in use patterns, trail user demographics and attitudes and trail neighbor opinions and interests between the various trails. This consistency between trail use, trail users and trail neighbors in cities throughout different geographic regions of the State is remarkable. Further conclusions from the Indiana Trails Study are divided into two general areas; those dealing with trail users and those dealing with trail neighbors as follows:

Trail Neighbors were found to be regular trail users. The trail neighbors also indicated they were largely satisfied with the subject trail as a neighbor, and that the trail had no effect or a positive impact on their property values. The Study found that trail neighbors are more concerned with problems relating to illegal vehicle use, parking and noise (privacy issue), than litter or maintenance problems.

The Indiana Trails Study was remarkable in the amount of information it obtained. The breadth of questions in the Study sacrificed the gathering of details, instead opting to create preliminary or reconnaissance level information regarding trail preferences and operational issues from trail users and neighbors. This information should be advanced with further research focusing on trail planning and management preferences, privacy, accessibility, crossing preferences and relations to amenities and open space. While further development of trail planning, neighbor privacy, user accessibility, open space and amenity preferences, and other design and management factors should be conducted with sponsoring agency support, it is clear that some preliminary recommendations regarding these issues can be made.

In many ways, the Indiana Trails Study confirmed what is already understood about trail development, and has been found in other trail developments across the country. First, it is obvious that the key constituencies in trail development will be trail users and neighbors. The carefully planned involvement of trail neighbors and users in public trail planning and development decisions seems like a logical and appropriate choice. Yet, some agencies have been observed not including these key constituents in planning.

Recommendation 2: Planning for trail development should be expanded beyond physical improvements and financing to consider a) the creation of trail neighbor privacy enhancements such as landscaping, b) operational improvements including safety patrols, c) volunteer litter pickup groups, d) addition of signage and monitoring requiring pets to be leashed, e) peak hour demand design in trail width and parking area size, f) funding linkages of trail operation and construction costs to health and wellness organizations such as local hospitals, and g) implementation of annual use fees to fund safety patrols, and other trail operation or maintenance costs.

Recommendation 3: Trail managers should strongly consider developing staffing and safety patrol scheduling schemes, or arrange for volunteer EMT or paramedic patrols that reflect peak trail use patterns, allowing for high visibility and assistance during these times. Trail use patterns in the Indiana Trails Study show definite peak demand times for trail use. These peak demands are fairly predictable based on work and leisure schedules of the general populace and can be anticipated fairly easily by trail managers.

Recommendation 4: Trail planners should more aggressively support commuter use of trails by requiring requests for trail development funding to include an analysis and survey of potential commuting users, and any work-home nexus identified in the trail area.

Clearly, the Indiana Trails Study found that trail users relied heavily on driving and entry/exit to the trail at the same access point along the trail. With commuters representing a small number of trail users in the Indiana Trails Study, the potential is considered high for the development of enhancements and enticements to trail area employers to increase commuter effectiveness for trails in more densely developed areas.

Recommendation 5: Trail planners should more aggressively support visitor and tourist use of trails, and cooperate in planning for visitor access to the trails through inclusion of visitor serving attractions in route planning and trail development.

The unrealized potential of trails was identified in the Indiana Trails Study, as visitor user patterns were minimal. In comparison, other trails and trails studies have reported a high amount of visitor use of multi-purpose trails, and the ensuing economic impact of visitor expenditures in food/beverage, lodging and ancillary sectors of the local economy. This unrealized potential is considered significant as trails begin to connect between cities.

Recommendation 6: Trail developers and managers should pursue collaborative strategic partnerships with health and wellness service providers based on the Indiana Trails Study that users primarily use the trail for health and fitness.

Another example of unrealized potential from the Indiana Trails Study is found in the significant amount of trail users who reported that health/fitness purposes were their primary purpose for using the trail. With Indiana's ranking by the Center for Disease Control as one of the most obese states in the nation, and the potential societal cost benefits to Indiana of emphasizing cardiac and overall health, the benefits of local trail agency partnerships for trail planning, construction, enhancements and programs with health and wellness organizations are noteworthy. The potential positive impacts of this type of collaborative partnership are estimated to be exceptional.

A key benefit of the Indiana Trails Study was the collection and documentation of Indiana trail use patterns, management operational facts, user opinions and neighbor concerns. In retrospect the information obtained represents "base line" research that is an important and effective tool for the pubic agencies managing trails and trail areas. Yet, some agencies do not conduct research in trail use and other factors relating to trail operations and management. An upfront minimum investment of $500- $2,000 (plus agency staff time) for infrared trail counter purchase and conducting mail surveys seems small in light of the positive information and trend issues this investment can create. It is apparent that collection of data of the type collected in the Indiana Trails Study is essential to documenting use levels and addressing concerns.

Recommendation 8: The Indiana Trails Study should be viewed as a reconnaissance level study that creates the opportunity for more detailed, longer-term, (i.e. one-year) study of additional trails.

Obviously the Indiana Trails Study found many similar conclusions about the 6 trails in the Study. While there are remarkable and very notable similarities between the trails, it should be noted that each trail area is still unique, and future trails areas will be unique. Trail planning agencies should be careful about assuming that trail user patterns, user opinions and neighbor attitudes will be similar to other trail sites. Use of the conclusions and data found in the Indiana Trails Study should be carefully generalized to reflect the broad findings as applied to these 6 specific sites. Additionally, the Indiana Trails Study was a "snapshot" of users over a limited time period of a few months in the summer and fall. This data is limited in many respects, and while it can be generalized to some extent, it is not as comprehensive or complete as it could be.

The Indiana Trails Study was conducted between June and November 2000 with the purpose of identifying information and trends on trail use, trail management and trail impacts. The Study was conducted in 6 Indiana cities on trail segments that were at least 2 years old and represented various populations and trail types. In conducting the Indiana Trails Study, trail users and trail neighbors were surveyed, trail use levels were monitored and local realtors were contacted regarding trails in the community. The research process involved significant cooperation from various state agencies including INDOT and IDNR, as well as the support and assistance of the National Park Service and the local agencies managing the 6 trails in the Study.