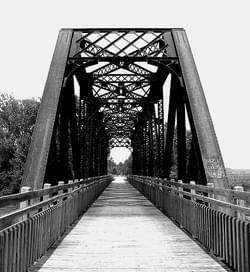 Former railroad bridge near Mokane, Missouri-converted to pedestrian use as part of the Missouri "MKT Trail" system; photo by Seanpmc1

On September 29, a new 40-mile section of the Katy Trail opened between Treloar and Mokane, Missouri. This will give bicyclists and hikers a clear, 185-mile scenic track along the Missouri River from St. Charles to Franklin and, away from the river, on over to Sedalia. Proponents of the trail-- built on the abandoned road bed of the old Missouri-Kansas-Texas Railroad-- have touted it as one of the best tourism bicycle paths in America.

An influx of tourists would mean an economic boom for the small towns along the Katy. But merchants' outlooks vary widely. Some see a great opening, while others say the trail has been-- and will remain-- an economic bust. Supporters say its potential has been undersold.

"The use of the trail is a little hard to estimate since so many people get on and off at different points. But we believe it's 300,000 visitors (a year) and that should increase," said Sue Holst of the Missouri Department of Natural Resources, the agency that oversees the trail.

Donald N. Humphries laughed at the state's estimate. "I wouldn't put (the traffic) at 100,000 a year," said Humphries, president of The Touring Cyclist, an eight-store chain that is St. Louis' largest independent bike dealer. Humphries is, however, a firm believer in the trail. He has three bike rental outlets on the trail in St. Charles, Defiance and Augusta. And he organized 30 bike tours over the summer.

Those disappointed over the trail's limited economic impact pin the blame on acts of God-- the floods of 1993 and 1995. The floods damaged not only the trail but many small businesses as well, leaving owners with three to four feet of Missouri River water and mud in their stores.

Despite the hardships, many merchants remain bullish. But the most optimistic business people are concentrated in the towns of Defiance and Augusta. "We opened in 1993, but we had to shut it down for a couple of years because of the floods," said Art Reed, who owns Seasons & Memories in Defiance with his wife, Faithe.

"I think the floods have really caused a death and a resurrection of new business. A lot of the old merchants have sold out and have been replaced by new people," Reed said.

"This year the business on the trail is definitely picking up. There's a whole new attitude, a whole new hope," Reed said. "This August was our best month, and normally August is a slow month... On any given weekend day, we will ring the cash register 300 times." Reed makes and sells bent-wood furniture and musical instruments and operates the Touring Cyclist's bicycle rental outlet.

Also in Defiance is Das Gast Haus Nadler, owned by Dave and Jacquie Nadler. The Nadlers remodeled their grandfather's 1908 home into an upscale, four-bedroom bed and breakfast. They also are remodeling a tavern next door.

Since their opening in 1994, Nadler said, the B & B business has grown every year. "We get a lot of repeats," Nadler said. "We have a couple right now who are just doing a little R & R; they just want a quiet place to stay. And then we get people who just want to party."

Like other business owners, Nadler said the opening of the 40 miles between Treloar and Mokane should be an economic boon. "We will now have people riding from one end (of the Katy) to the other and staying at the bed and breakfasts," Nadler said.

Terry Lee, who recently bought Defiance's other tavern, argues that the state should expand its trail facilities in town. "On the weekend, there's no place to park," said Lee. "The lot next to the trail fills up and people start using our spaces." Lee's tavern is right next to the trail and, like Nadler, he is planning to build an open-air beer garden.

In Augusta, eight miles to the west, local merchants are equally optimistic about the opening of the new trail section. "We get at least 50 to 75 percent of our business directly off the trail," said Johanna McGee, who owns the Cookie Jar Restaurant and the Bread Shed Bakery with her husband, Mike.

"The cooler weather has been great for trail business," McGee said. She is looking forward to a strong fall and Christmas business as tourists use the Katy during the changing of the leaves.

Location explains why Defiance and Augusta are benefiting economically from the trail, said P. Charles Dressel of Mount Pleasant Winery in Augusta. "Families will park in Defiance, bike to Augusta for lunch, and bike back," Dressel said. Nadler said Defiance also benefits from being about the right distance from St. Charles for "a good day's ride."

Needless to say, bike rentals are a major business on the Katy. "We have 50 bicycles for rent here," said Matt Hendrickson, manager of the Touring Cyclist in Augusta. "At any given time 20 or 30 are (rented) out, and on weekends they are generally all rented."

But not all trail merchants are optimistic. Merchants west of Marthasville on the existing Katy and on the new Treloar-Mokane section are generally pessimistic. Linus Glosemeyer and his wife Loretta have operated their Glosemeyer Store in Peers since 1940. An old-fashioned country store, the market sits just 50 feet from the Katy.

Before the trail opened, Loretta Glosemeyer told a reporter, "The trail won't make any difference to our business." Six years later, Linus Glosemeyer confirmed his wife's thinking. "No," he said, "we don't get business off the trail. Maybe two or three people will come in on a Saturday."

But Bernie and Betty Kaminski in Steedman are more upbeat. They own a classic country tavern, the "S.O.B-- Steedman's Only Bar." Steedman is on the western end of the Treloar-Mokane trail section.

"This part of the trail isn't open-- there are still signs up saying that it's closed-- but we are already getting people using it," said Bernie Kaminski. "We had a couple from Australia come in... and we have people coming in from Kansas City.

A lot of folks from Jefferson City have been biking up to Hartsburg (west on the trail)," Kaminski said, "but once this section is open they should be coming this way."

The Kaminskis do offer something that is lacking on the trail-- overnight camping. "We have a little area off to the side and we are open to 1:30 a.m. so people can use our bathrooms until then," said Bernie Kaminski. "And, in a couple of weeks I'll start serving breakfast," Betty Kaminski said.

While there is great business potential for tourism on the Katy, Humphries of The Touring Cyclist argues that the state tourism bureau and the Department of Natural Resources have failed to sell the trail.

"There is nothing in the Midwest to equal the Katy Trail-- but the DNR is very poor at public relations," Humphries said. "We are light-years behind other states in promoting tourism-- we need to educate the public. I would say that the trail is only being used 10 to 15 percent of its potential." Humphries said the state should promote the Katy in a national ad campaign in tourism and biking magazines. "Word-of-mouth advertising is not going to do it," he said. 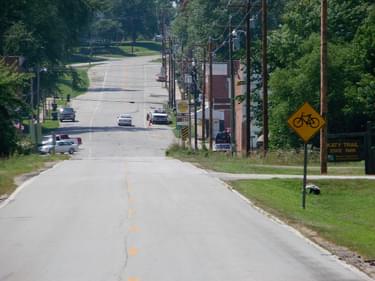 Letters to the editor

Some interesting comments on the previous article were recorded after it appeared; ©St. Louis Post Dispatch; reprinted with permission

The negative tone of the Sept. 16 front-page promotional banner for the article about the economic benefits of the Katy Trail misinterpreted the article. It said that some trailside businesses are not optimistic that the completion of a final trail segment would help them.

The article was about the dozens, if not hundreds, of small businesses that were created or grew because of the trail, and the degrees that it had helped and would help them. The only negative statements were made by Linus and Loretta Glosemeyer, who felt that the new segment near them would have no impact on their store.

Even disregarding the health, environmental and quality-of-life benefits of the Katy Trail and focusing only on economics, the remaining question is only whether it is a major success or an incredible success.

It's wonderful that a new section of the Katy Trail is being opened to Missouri bicyclists and hikers.

It's unfortunate, however, that the Katy Trail remains a restricted-use trail, unavailable to a large number of adult fitness enthusiasts. Paving the trail would make it a true multi-use path that could be enjoyed by everyone, including wheelchair racers and in-line skaters.

In-line skating is the fastest growing sport in the country. The majority of skaters are adults who skate for fun and fitness. Such skaters have no interest in stairs, rails or parking lots. They are looking for paved fitness trails that will allow for uninterrupted long distance aerobic workouts in pleasant surroundings.

Paving the Katy Trail would open it to this growing market, which would provide an economic boost to businesses along the trail and provide area skaters an alternative to Forest Park.

Until the Katy Trail is paved, its full potential will not be realized. As Donald Humphries, president of The Touring Cyclist, said in the article: The trail is only being used to 10 to 15 percent of its potential.