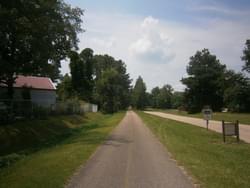 THE ECONOMIC BENEFIT STUDY CONCLUDES THAT:

The study determined that an estimated 680,000 tourists engage in some bicycling activity while in the northern Outer Banks area annually. This represents 17% of all visitors to the area. The quality of bicycling was an important factor in choosing to visit the area for 43% of bicyclists who were surveyed. While other tourists may not choose to visit the Outer Banks specifically because of its bicycle facilities, many may choose the area over another coastal or resort community because of these amenities.

Bicycling visitors and tourists have a direct and substantial economic impact on the area,according to the study. A conservative estimate of bicyclists' expenditures in the northern Outer Banks is $60 million annually. These visitor expenditures are expected to produce many other widespread benefits to the local economy, including:

The longer tourists stay in an area, the more they generally spend. This means that the duration of bicyclists' trips was an important economic factor to measure. Twelve percent of respondents reported that the duration of their visit was longer because of bicycling, by an average of four days. The average bicyclist surveyed on the facilities reported riding on 69% of the days of their trip while in the area. This high rate of bicyclist activity— as well as decisions to extend the duration of visits— may have been influenced by safety. Two-thirds of respondents reported that the bicycle facilities made them feel safer while riding. In addition to encouraging more bicycling and extending bicyclists' stays, the study found that the quality of bicycling was important in decisions to return to the area. In fact,a higher percentage of respondents said that bicycling would be more important in deciding to return (53%) than it was in their decision to come to the area (43%). The research suggests, therefore, that once exposed to the quality of bicycling in the region, visitors are more likely to come back.

The northern Outer Banks study found that bicycling tourists may have a good deal of purchasing power: they tend to be well educated with fairly high incomes. And, they love to bicycle. Study findings revealed the following bicyclist characteristics:

Clearly, bicycle tourists drawn to the good bicycling opportunities on the northern Outer Banks are having a positive economic impact on this area.

THE ECONOMIC BENEFIT OF BICYCLE FACILITIES OUTWEIGHS THEIR COSTS

While the northern Outer Banks study looked specifically at the economic impact of bicycling tourists, other studies have shown that bicycle facilities improve the overall quality of life in a community. For example,the bicycle facilities can:

Bicycle paths, greenways, and on-road bicycle improvements can also help to enhance the overall experience of a visitor to a coastal or resort community. Visitors who bicycle are more connected to the natural and built environment and to the experiences that the area has to offer. In the northern Outer Banks, for example, a bicycle path across the Wright Brothers National Memorial property provides a unique perspective on this popular attraction. The system of bicycle facilities in the area connects the towns and villages along the Outer Banks and provides access to historic sites, recreation areas, beach access sites and places to shop and eat. In short,the bicycle paths and on-road improvements encourage tourists to enjoy an outdoor vacation and promote the full experience of being in a coastal community. And those tourists who take advantage of all a resort community has to offer may be more likely to return.

The study suggests that continued investment in bicycle facilities could only be expected to increase the favorable economic impact found in the northern Outer Banks and is therefore recommended by the NCDOT. These investments can also help North Carolina remain competitive with other nearby coastal states for bicycling tourists. The types of bicycle facility investments found to be most desired in this study are:

In addition,the NCDOT recommends that state and local governments:

TYPES OF DATA COLLECTED AND CASE STUDY METHODOLOGY. Researchers used an economic impact model to analyze the raw data collected from the surveys: