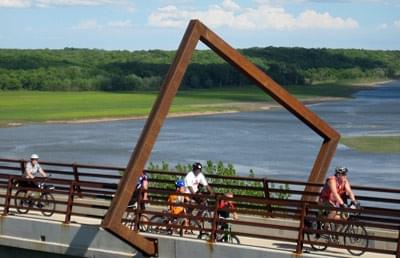 The trail traces the former Union Pacific Railroad right of way through the heart of central Iowa. When the UPRR discontinued the corridor, the railroad removed the superstructure of the railroad bridge that crossed the broad Des Moines River valley west of Madrid, Iowa. However, the concrete piers remained and served as the foundation for construction of the new bridge crossing.

As the steering committee pursued the final $2.5 million to complete the trail and bridge it decided to include artistic and interpretive elements in the final bridge design. An Iowa Arts Council grant provided the seed money to hire an artist to develop concepts. The illustrated concepts of the bridge design were instrumental in helping the committee reach the fundraising goal. 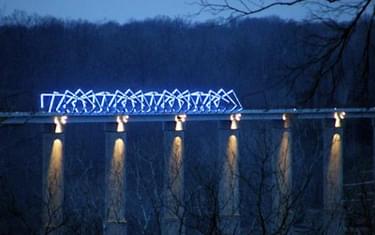 Lights on the High Trestle Bridge

An Iowa artist, David B. Dahlquist, created a vision that weaved in the local coal mining history and regional geology. Steel “cribs” reminiscent of a coal mine shaft framed the bridge and four monolithic towers of “coal and limestone” formed a gateway. Lighting of the towers, cribs and piers became part of the plan as well. The project includes a 13 story tall “art bridge” that spans 1⁄2 mile from end to end in Central Iowa. The new bridge design included six observation decks, a scenic overlook, and natural and cultural interpretive panels.

The resulting High Trestle Bridge is a dramatic structure that has become an icon for the Iowa trail system. The photogenic bridge has been featured in the American Trails Magazine (Spring 2011), Rails- to-Trails Conservancy magazine and 2012 calendar, Landscape Architecture Magazine, Iowa Public Television’s program “Iowa Outdoors,” Des Moines City View, and other local and region publications.