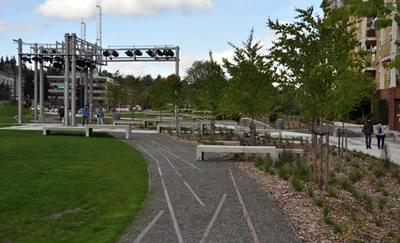 The City of Redmond, Washington is actively shaping investment and policy to ensure that its community is inspired and connected by arts and culture.

Artists and landscape architects influence every park and public place. Beyond the physical form of spaces containing and being shaped with art, these places are designed to become a catalyst for ephemeral arts and cultural programming.

Mayor John Marchione led Redmond in the acquisition and development of the Redmond Central Connector, a 3.9-mile rails-to-trails pilot project for integrated art and landscape design. The first phase of the Connector is a one-mile trail with integrated art that opened in December 2013. It is expected to attract more than 200,000 people annually. Landscape architects and artists worked together to develop the trail’s master plan with an art and design element. 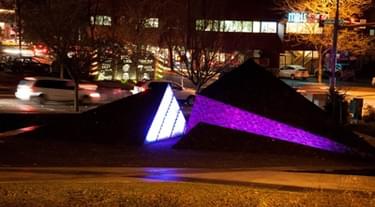 The City says "Redmond is actively shaping investment and policy to ensure that the community is inspired and connected by arts and culture; in turn, arts and culture are becoming a catalyst for the city to grow and welcome residents and visitors alike. Public places and city programs and events actively infuse art and culture to build community and stimulate creativity. The technology industry that drives Redmond’s economy provides a culturally diverse workforce that values and is attracted to a strong arts presence."

The City is activating the Connector for performances and cultural events. In December, 2013, Mayor Marchione led 10,000 people down the Connector during the annual winter festival, Redmond Lights, officially opening the trail and dedicating the Erratic. In March 2013, nearly 100 people attended the unveiling of Signals with live music on this stage along the trail. In August 2014, the city produced the So Bazaar Night Market, creating three magical evenings bringing over 5,000 people to the downtown core. People walked and biked along the trail and parked on the Sky Painting. Musicians played and the audience danced under Signals, people watched from the earthen berm, and others strolled along the art market by the trail. In fall of 2014, an artist-designed Moving Arts Center will find a new home on the Connector in a newly designed landing.