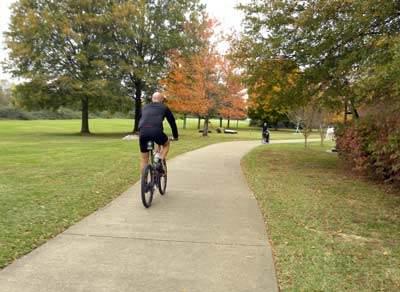 Much of the trail system runs through a park setting

The development of the park and trail system was a turning point for Chattanooga and now its Riverfront Renaissance Story is being told internationally.

The most comprehensive and inclusive planning process ever undertaken in Chattanooga began in 1985 with an appointed task force. Their goal was to orchestrate a true, all-inclusive community planning process. After hundreds of public and private meetings involving thousands of citizens, the Tennessee Riverpark Master Plan was established. The vision operated under the premise that the Chattanooga riverfront was owned by everyone and should be developed “under a guiding idea which will bring its banks to life, make it a central point of pride for the City’s people, and move it to the forefront of national consciousness”. By reconnecting with the river, the city was to make over its image and fuel the engine of central economic development.

In only 20 years, a relatively short span of time, this series of successful public and private endeavors helped create new national attractions, retail, restaurants and housing in the downtown area. The project has been magnified by one success after another and by the importance placed on it by the many energetic leaders from both the private and public sectors. Chattanooga is a city that has learned to plan and implement perhaps better than any in the nation. Chattanooga has also learned to partner well. Given the current demand upon both local governments and the private sector, real progress requires the best minds of both to join forces and resources to achieve success. 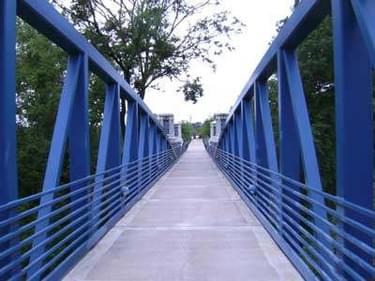 The other, almost unmatchable resource in Chattanooga’s quiver is the funding provided by local charitable foundations to support this visioning, planning, design and development process.

Orchestrated by the Chattanooga-Hamilton County Regional Planning Agency, in cooperation with surrounding counties and municipalities, planning for future phases of the Riverpark is always underway! Using the Tennessee Riverpark as the core of the massive plan, construction of additional trails is currently underway southward into North Georgia neighborhoods and northward toward the Cumberland Trail. Just across the river from downtown, plans are being drafted and funding is being sought for trail extension into the newly established Moccasin Bend National Park.

In another 20 years, most Chattanooga neighborhoods will be connected by walking and hiking trails, bikeways, blueways, equestrian trails and more. Our goal is that people will choose to use them over traditional modes of transportation for many of their daily activities.

Several of Hamilton Counties’ other initiatives and organizations consider the Tennessee Riverpark as a resource toward accomplishing their mission.

The Step ONE Program, an anti-obesity program who name is an acronym for “Optimize with Nutrition and Exercise”, promotes the use of the Riverwalk and Chattanooga’s vast number of trails to citizens as a key to reaching and maintaining a healthy weight.

The Bicycle Safety division of the health department promotes the use of helmets and safe traffic skills at several special events held on the Riverwalk each year. There are also signs and educational materials about bike safety posted along the route.

The University of Tennessee at Chattanooga’s Women’s Rowing Team houses their fleet and practices daily at a facility located on the Riverwalk.

The 21st Century Waterfront, the heart of the city at the river and the venue for a great majority of downtown events, uses the Riverpark as a primary route for walkers and bikers to reach the site from a number of outlying parks and parking areas. By reconnecting with the river, Chattanooga has made over its image and fueled its engine with economic development. The Tennessee Riverpark has vastly improved the quality of life for the residents and visitors to Hamilton County.