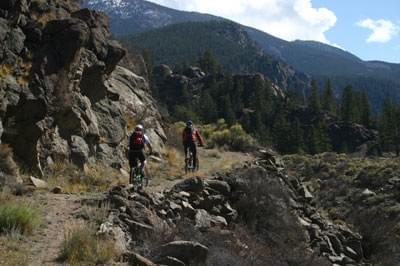 Bicycling along a section of the historic transportation route

The nominee is the “Feasibility Study Salida to Leadville Trail Corridor,” a grant-funded study assessing a 64-mile hiking/cycling/driving trail following historic stage and railroad routes along the Continental Divide in Colorado.

The study was published in June 2012 following inception in October, 2010. In the broader sense, the Nominee is really the process documented by that study: developing a long-distance trail vision, seeking potential partners, completing meaningful public involvement and identifying proponents, opponents, environmental concerns, motivating a constituency, and in the end, producing a credible set of conclusions and recommendations leading the project to more-detailed planning.This is a “work in progress” and no formal trail segments have yet been designated, no trailhead facilities or interpretive signs are yet on the ground. But we suggest that it is a solid foundation for future implementation of a complex, long-distance multi-jurisdictional trail in a rural setting, and perhaps it could even serve as a model for others. As such we respectfully submit it is worthy of consideration in the Planning and Design category. See The Feasibility Study below for details.

The small rural towns of Salida, Buena Vista, and Leadville lie along the upper reaches of the Arkansas River east of the Continental Divide in central Colorado. Situated below 14,000 foot peaks, the Arkansas Valley played a big part in exploration, transportation, mining and ranching history of Colorado. Of relevance to the Nominee, some of Colorado’s 1860’s stage coach and freight roads can be traced along the river’s course, as can 1880’s routes of rail lines such as the Denver and Rio Grande and Colorado Midland. Large proportions of the counties involved – Lake and Chaffee - are public lands managed by the Forest Service, Bureau of Land Management and Colorado Parks and Wildlife (CPW). Two scenic byways draw thousands of recreation and heritage tourists annually, and the river itself is the most commercially-rafted white water in the nation, and in addition is one of Colorado’s most popular and productive trout fisheries.

Although local residents have long shown interest in the old stage and railroad routes, focus on the significance and condition of the stage road between Salida and Leadville, and portions of the Midland in that same stretch and their trail potential began as a volunteer effort only in 2005. Previously undiscovered river crossings were located, faint or unrecognizable routes were scouted, crumbling retaining walls were mapped. Initial reporting focused on documenting the route and spreading word of its historic significance and noting deterioration of its physical remnants. Only gradually did this initial historical research morph into an actual Vision of a public trail. 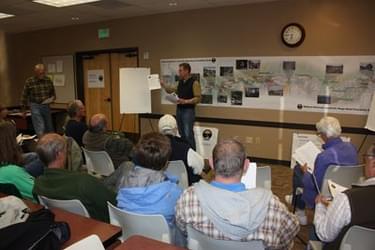 A public meeting to discuss the trail vision

The trail vision, as assessed by the Nominee study, is to establish a 64-mile long public access trail following the historic Leadville Stage Road and portions of the Colorado Midland Railroad. Some sections would be narrow, natural-surfaced non-motorized trail suited to hikers and fishermen, mountain bicyclists and horses; others would follow low-volume unpaved roads where licensed motorized traffic (and cyclists) are permitted. Some sections would be along shoulders of high speed paved highways or downtown streets of the three connected communities.

In its broadest sense, the vision is not only recreational but also a heritage celebration; it would highlight significance of early transportation routes, raise their visibility as heritage resources, facilitate physical stabilization and even foster collaboration between the two counties, three towns and multiple public land managers along its path. It would encourage an alternate slower experience of a corridor most commonly seen from a bouncing white-water raft or a speeding car.

Groundwork for a trail study started earlier than October 2010. It was a strategic decision that collecting information and presenting it as light-hearted history-detective work was a good way to nurture a constituency receptive to future public use and interpretation options. In other words, first establish understanding and social value of the resource before beginning to promote public use that includes actively celebrating and preserving it. This phase lasted from 2005 to 2009 when it was concluded there was enough public and institutional support for a grant application for $40,000 and to secure $12,000 in local matching funds demonstrating community support. Volunteers gathered under the umbrella of the non-profit nature association GARNA, who became applicant for the planning grant from the Colorado State Trails Program of CPW.

As more and more jurisdictions became aware of an initial modest central section of trail being considered, calls came for expanding the scope. This lead to its 64-mile length and characterization as a continuous hiking/biking/driving connection between iconic town trail systems along its path.

Upon award of the grant, professional planning assistance was contracted to Thomas and Thomas of Colorado Springs. The local trail working group assumed a major role in overseeing the planners, connecting them to key partners and issues, guiding them in public input, assuring quality of products, and sharing results with local decision-makers. Thus the public face of the study was not just a distantly-based planning firm but a team consisting of professionals and volunteers already locally well-known. This paid off when, after sharing the study’s results, with its positive conclusion on feasibility and recommendation to do a Master Plan, solid support and encouragement was rapidly obtained from crucial quarters.

For details the reviewer is referred to the accompanying study. The overview is that initially focus was on organizing information already gathered by volunteers. Using volunteer-generated material allowed planners to concentrate on some refinements but more on analysis and alternatives. Information was checked through public input where missed historic resources and interpretive opportunities were collected. Supportive public and interest groups provided suggestions for routes of a future trail while apprehensive opponents suggested alternatives to deal with private land owner or wildlife concerns. Dozens of potential public partners were identified ranging from Commissioners of the two counties, councils of the three towns, heads of the five land management agencies, unincorporated communities, private land owners, business operators, and hiking, cycling, fishing and horseback clubs. The approach to private land owners was circumspect, respectful and usually one-to-one to avoid inflexible positions that large group meetings may engender. Some land owners remain opposed to a trail passing near or through their properties, citing worry about privacy, interference with livestock, and possible vandalism or trespass. Concerns about impacts on wildlife and riparian habitats were heard from specialists of CPW. Though these hurdles are legitimate and serious, a major plus of the study is that few of the trail’s detractors have become so alienated as to refuse to continue to discuss future options. A significant recommendation is to develop a non-profit body which would provide coordination between entities responsible for different sections of trail to assure consistent standards, and to assist in locating grant funding for implementation and maintenance.

The length and complexity of the concept makes it clear a detailed Master Plan is needed. This will further refine alternatives and attempt resolutions to challenges and provide additional cost estimates and details. When completed, the Master Plan will be submitted to jurisdictions along the route; their approval will constitute commitment to implementation. As a measure of the quality of the nominated feasibility study, the public support it generated, and its success in keeping open the dialog, the key future partners have, with little loss in momentum, readily pledged a second round of match funding for a Master Plan grant application whose award is anticipated in April 2013.

Download the complete 67-page study with maps and illustrations