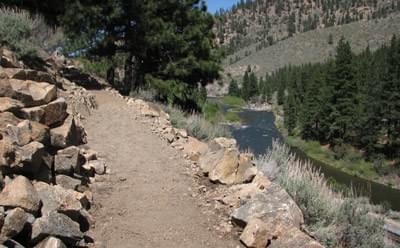 The Tahoe-Pyramid Bikeway along the Truckee River

Tahoe-Pyramid Bikeway is a nonprofit, all-volunteer organization with a mission to create a hike/bike trail along the entire 116-mile length of the Truckee River.

The group was founded in 2003 and the trail is 75% complete after 11 years of progress.

The Tahoe-Truckee Community Foundation wrote: “This project is a visionary long term effort— the type of project that people in 50 years will say thank goodness someone had the foresight to invest in protecting this land and these trail rights."

The Truckee River is a beautiful stream that flows from Lake Tahoe through Truckee and Reno, terminating in Pyramid Lake. The river corridor scenery varies from Alpine to desert, is rich in history, and passes through several eco-systems along its route. However, there is no non-motorized access to much of the corridor, and this beautiful river can only be seen at 65 mph from Interstate 80. The Tahoe-Pyramid Bikeway is creating a route to hike or bike along the river safely, without being on the freeway or railroad tracks.

The first project west of Reno, entering California, was to extend existing trails in Reno westward and upstream along the Truckee River. But doing so was difficult, because the canyon is narrow and the flat bottom area is already occupied by Union Pacific Railroad, Interstate 80, and the river. Truckee Meadows Water Authority’s utility road and bridge looked like a feasible way to travel three miles up the canyon and across the river, thereby connecting Nevada and California by trail. The condition imposed by the utility for allowing the public to share its road was that we rebuild its old suspension bridge for safe public use. Completion of the project has now opened the Truckee River canyon across the state line. 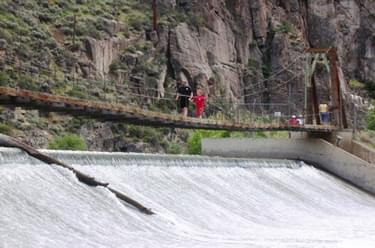 Fleish Bridge over the Truckee River

The project is notable for several features:

Through careful trail planning, the Fleish suspension bridge will be the only trail bridge needed over the Truckee River in the 13-mile California Canyon, which improves the likelihood that the entire trail will be completed within 5-10 years. Since the May 2013 completion of Fleish Bridge, additional trail sections have been built between Reno and Truckee:

These three rapid-fire trail segments have created tremendous momentum and awareness of the Tahoe-Pyramid Bikeway, both in California and Nevada.

The Bikeway has also received three national awards in 2012-2014: